This Friday night the Whitehall/Harrison football team will look to start their season with a bang when they open on the road against Shepherd.

Over a week into practice, head coach Dan Lacey is impressed with what he has seen from the 2017 Trojans squad.

"Practice has been great. The boys are flying around and really competing. I'm extremely impressed with our older group. They have done a great job in getting our younger kids ready to compete," Lacey said.

Following a deep run into the Class B Playoffs, Lacey is happy with the work of his team during the offseason.

"We had the most kids we have ever had attend the team camp at Montana Tech and several of our athletes attended more than just the Tech camp," he said. "We had multiple players attend the Bobcat and Griz camps, a few were invited back to the tech elite camp, and we also had a group travel to North Dakota to camps out there. So the buy in has been awesome."

Along with a talented returning offensive line, Whitehall will go into the season with what Lacey calls a great group of skill players who he plans to move around to different positions throughout the season.

"Between Braden Smith, Lane Buus, Connor Johnson, and Sawyer Keener, you will probably see them all line up as a receiver and running back in every game we play based on matchups and personnel packages," Lacey said. "As a coach, this is a good problem to have when you are able to switch your running backs around and have a totally different style each time you change your running back. The great thing about that as well is they are great receivers as well. So that makes us very versatile on offense."

Whitehall will also return first team all-conference receiver Wyatt Alexander who had 64 receptions for 1,147 yards and 15 touchdowns during his junior campaign.

"Wyatt is a very special talent that doesn't come around very often. He is the type of player that teams have to scheme for in all three phases of the game. He has tremendous ball skills on defense and his catch radius on offense is one of the best I've ever scene," Lacey said. "He worked very hard over the summer to get physically ready for the season and I'm extremely proud of him for that. I'm really excited to see the jump he takes from a historic junior year."

On the defensive side of the ball, Lacey said they also have a great group of skill players who he will also move around to different positions. 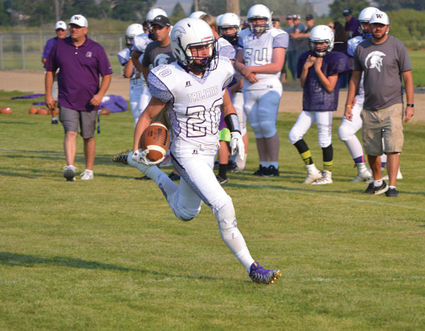 Junior Connor Johnson runs in a touchdown at the Purple and Gold Scrimmage last week. The Whitehall/Harrison High School football team will open the 2017 season Friday at Shepherd.

"Defensively we are very fundamentally sound. We need to make sure that we trust the people around us to do their job and good things will happen," he said.

Looking ahead to the game Friday night against the Mustangs, Lacey is expecting to see a ground and pound type of opponent.

"In years past they have liked to run the wish bone style of offense so stick to our run gap assignments will be crucial to have success in stopping their running game. Defensively I'm excited to see what they will do to match up with us," he said.

"Our boys will be ready to go out and compete. I'm looking forward to the road trip and the start of the 2017 season."