Sound of Music echoes through canyon 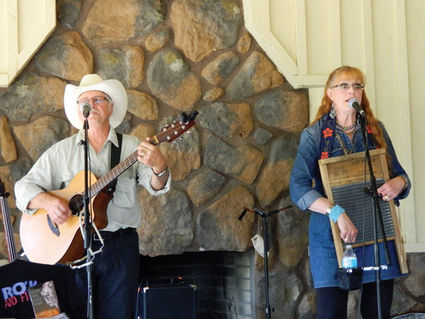 Rock and Flower (Bruce Goebel and Debra Christiansen) play Americana music during Music by the Caverns.

"Feed your babies onions so you can find them after dark!" Or, how about "Ho Ho Hey, Don't take my boat, I got's fishin' when I get to Hare Bay." The audience was singing, laughing and clapping! We had been asked to sing along by Bob Ringler and Friends (Barb Pearson and Lynda Brannon) and by Rock and Flower (Bruce Goebel and Debra Christiansen). It would have been rude to not sing along – right?!?

The Music by the Caverns' final 2017 season event was soaring along on a high note. This season was held at the Lewis and Clark Caverns Pavilion in the lower campground. The campers and drive-in audience members could easily come and go all day from 10 A.M. to 6 P.M. The sun was shining, but we were sitting in the shade of the Pavilion and there was a light breeze blowing which created extra musical sounds as the leaves of the trees danced along. Producer Donna Weldon racked up another hit and that was before she and Ron Jung played a set later in the afternoon and then to round out her program she played along with Shelby Hutson at the end of the program.

Bob Ringler and friends (Barb Pearson and Lynda Brannon) hail from Helena and Ennis. They join together to play at various jams and with the Montana State Old Time Fiddler events. This was their first time to play in the park. They used the violin, guitar, mandolin and banjulele (miniature banjo) to augment their old time fiddle tunes. The audience tapped through "St. Ann's," "Liberty," and soon sang along to "Whiskey" – a Scottish tune concerning community drunkenness about an old man shot before breakfast – "Lord preserve and protect us we've been drinking whiskey for breakfast."

Next to join the jam were Rock and Flower playing Americana music. Bruce Goebel and Debra Christiansen are from Edmonton, Canada who snowbird to Boulder. They use the guitar, bass guitar, washboard, tambourine, harmonica and a handful of other percussion instruments to enhance their musical stories. At the beginning of their set they advised that they played 'push, shovel music' and were story tellers, singers and song writers. They began with a song Goebel wrote "It's Rodeo Time In Boulder Tonight." An interesting rendition of "Summer Time" was accompanied on the Bass Guitar. The audience was invited to shuffle or wiggle along to "I Go Out Walkin'."

Following close on the heels of this musical group was Monty Montgomery from Butte. Monty plays Rockabilly on a guitar while singing along. He played hits of the 50s and 60s such as "Travelin' Man," "Weekend in Canada," "Maybe Baby." He is also a song writer and presented an interesting "Queen of Hurt."

The afternoon music delights continued with The Ferg and Rick Wine and David Cogley. They used guitar and mandolin to play Country hits which began with a lovely offering of "The January Waltz."

Monty Montgomery brings some nostalgia with 50s and 60s Rockabilly music during Music by the Caverns.

Plans are already in the works for the 2018 Season which includes programs in June, July and August. Producer Donna Weldon invites those interested in performing or working as a volunteer helper to give her call at 287-5376.