After two away games to start the 2017 season, the Whitehall/Harrison High School football team was able to open their home season earlier this month against Red Lodge. While the game had the importance of the home fans getting their first chance to see the Trojans play in Whitehall, it also was of extreme significance because it was the first game at Trojans Field with the new bleachers.

The previous bleachers had been at the field for around 60 years, so this was an amazing day for the district to be able to showcase an upgrade to the facility.

What makes this project so special is that it was accomplished with donations and a lot of hard work from local residents. This says so much about the community.

The new bleachers are something that the School District and local residents can take a lot of pride in. It was time for the old bleachers to go and this is a great upgrade.

There is a large sign behind the bleachers placed by the Whitehall School District to thank all those who helped the project come to fruition. It was also done without costing the district money.

When he passed away, 1970 WHS graduate Michael Grauman donated a sizeable amount to the district in his memory. Over $60,000 went to the bleachers project. I remember hearing at a school board meeting that Grauman had stated he would like the money to be used for athletics, and what better way to do this than an upgrade to the field. I'm sure he would be proud of the bleachers.

The local Whitehall Tax Increment Finance Board also donated over $12,000 to the project. The TIFF board constantly strives to make the community a better place to live and this is money well spent. There was also a significant donation as a result of a scrap metal sale from items donated by the Golden Sunlight Mine. This is another example of the mine giving back to the community.

There were also countless hours of time and labor donated by many other residents. I encourage people to take a look at the sign by the bleachers and thank all those mentioned for their help through donations, labor, or other contributions. 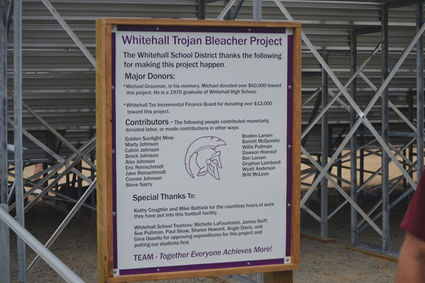 Pictured is the sign in front of the new bleachers at Trojans Field.

A big shout out to the School Board for allowing this project to happen.

The budget is down for the local school districts this year, so anytime a combined effort like this can happen without costing them money; it is a win-win for everyone.

If you haven't seen the bleachers yet, be sure to make it to the Homecoming Game October 6 against Jefferson.