Conference title on the line Friday against Manhattan 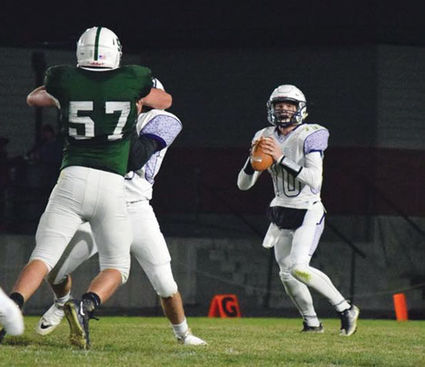 The Whitehall/Harrison High School football team took care of business Friday night in Columbus, and will play for an outright divisional championship October 20 against Manhattan.

Up 6 to 0 at halftime, the Trojans (8-0, 6-0 Southern B) used two long second half scoring strikes from Max Feight to Wyatt Alexander on their way to a 26-6 road victory.

“Overall I thought we played well. We ran the ball a lot more than usual and I thought that style of physical play wore Columbus down in the second half. Defensively, we had some big stops in the red zone and forced some turnovers,” head coach Dan Lacey said.

Whitehall scored the lone touchdown of the first half on a 30-yard pass from Feight to Alexander in the first quarter.

In a close first half battle, Lacey said it was huge for the Whitehall defense to keep the Cougars out of the end zone.

Offensively, Lacey said his team was without center Kayden Howser in the first half, and this may have thrown of their rhythm.

“Anytime you switch positions it is difficult to build that trust especially at the center position. He was able to play the second half and you could see a big difference in our offense,” Lacey said.

The Trojans would score the only points of the third quarter when Feight connected with Alexander for a 50-yard touchdown to push the lead to 12-0.

The dangerous duo of Feight to Alexander would pay dividends early in the fourth, this time for a 45-yard touchdown to increase the lead to 18-0.

Columbus scored their lone touchdown of the game moments later on a 17-yard touchdown pass from Eddie Foos to Dylan Raihl.

Whitehall would answer the lone Cougar score with a long drive that culminated with a 17-yard touchdown pass from Feight to Braden Smith. The Trojans were successful on the two-point conversion when Smith ran the ball into the end zone to push the lead to 26-6.

“I thought our last touchdown of the game answering Columbus score was really big for us going into the Manhattan game,” Lacey said. “We were able to march down the field with our running game and we did it with four different players carrying the football. That’s makes it difficult to just key on one specific back.”

Feight finished the night 14 of 28 for 253 yards. The junior quarterback had four touchdowns, two interceptions, and was the team’s leading rusher with 112 yards on 15 carries. Sawyer Keener had 51 yards on eight carries, Connor Johnson had 48 yards on three carries, and Smith had three carries for 12 yards.

The Trojans win sets up a huge final game of the regular season against the Tigers, who will come into the game with a 7-1 (5-1 Southern B) record after a 61-14 triumph over Three Forks.

The winner of the game will go into the playoffs as the number one seed from the south conference, and would have home field advantage at least through the semifinals.

“The focus this week is to understand how hard our team has worked to get the opportunity to play for the conference championship at home the last game of the year. You couldn’t ask for a more exciting last regular season game. It will be a playoff style atmosphere so I think that is huge heading into postseason play. We need to rest up physically and mentally, and be ready for an exciting matchup against a quality opponent,” Lacey said.

Taking a closer look at Manhattan, Lacey sees a lot of similarities in the two teams that will battle next Friday.

“Manhattan is a lot like us. They are a big play offense and a fundamentally sound defense. I think special teams and turnovers could be the difference. We will have some fun match ups to look at in the game -- their receivers against our secondary, and our receivers against their secondary. One thing we need to be ready for with Manhattan is their overall team speed,” Lacey said.

The Trojans head coach is also looking for a huge crowd at the final regular season game of the season. 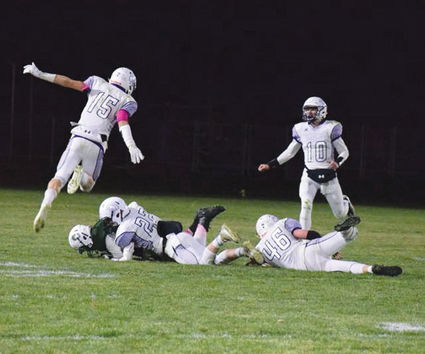 Trojans senior Braden Smith (15) flies through the air on defense.

“I would like to tell the fan base they will be in for an exciting game Friday night. Our team and coaches have worked very hard to get an opportunity for this type of game to decide the divisional champion,” he said. “This Friday will be a great opportunity to not only watch a great football game, but a chance to watch a great group of young men you have represented their school, community, and families with class and pride. That’s what makes coaching so enjoyable. This team has impacted many people in our community, our younger athletes have great role models to look up to, and Friday night the Trojans will play their hearts out for their families, school and community. We would love to see a packed house wearing purple.”