With 2018 just a few days away, there is plenty of local news to look back on that took place during 2017 in Whitehall and the surrounding areas.

In a special election November 7, local voters approved the formation of the Jefferson Valley Rural Ambulance District in the Whitehall area.

According to Jefferson County Election Administrator Bonnie Ramey, the rural ambulance district was approved by a vote of 372 to 188. The district does not include the Town limits of Whitehall.

Voters also approved a board of five directors for the new district. The board members elected are Dana Brunet, Amy DuBois, Rico Patacini, Susan Pullman and Tara L. Tebay.

The Board had their first meeting in early December and elected Pullman as Chair.

At a meeting in late May, the Jefferson County Commissioners voted 3-0 to approve Resolution 14-2017, Calling for an Election Regarding the Formation of an Ambulance District in the Whitehall area and the Election of a Board of Trustees.

At the same meeting, the Commissioners also voted 3-0 on a resolution to set the qualifications for board members.

The Montana Mule Dales event in early June brought in an estimated 950 to 1,000 through gates. The Montana Long Ears Association sponsored the event.

"I was very impressed with the Montana Mule Days event this past weekend bringing to the area many out of town guests visiting Whitehall for the first time. A big thank you to all of the people who worked hard to make it happen. Putting on an event of this magnitude is a huge undertaking and congratulations to the organizers on a job well done," he said. " These types of events are very important for many reasons including showcasing Jefferson County to people who might otherwise not have a reason to visit. Many out of county visitors attended Mule Days and they spent money for lodging, at restaurants and businesses, creating a positive economic impact on Whitehall and Jefferson County."

Binkowski was hired in January as the new Jefferson County Event Coordinator. Originally from San Diego, Binkowski was the former public address announcer for both the Padres and Chargers.

FIRE AND OTHER NEWS

Lighting on August 24 started a wildfire seven miles northeast of Whitehall. The fire was reported 100 percent contained in early September. The total acerage of the fire was 2,741. The fire started on private land in Jefferson County within the Whitehall Fire District and has burned onto lands administered by the BLM and USFS.

The annual Steve Dyson Pool Tournament in Whitehall was a huge success.

Dwayne McClanahan of the Whitehall Pool League said a total of 51 teams participated, and the winning team of Dan Hamper and Lance Stanchfield received $1,000. McClanahan said he was very pleased with the turnout at the 2017 event.

The Whitehall Town Council voted in February to enter into an agreement with Beacon of Hope Inc. to lease the ambulance barn and equipment. In early August, the Council voted to terminate the lease with the service.

According to Deputy Town of Whitehall Attorney Elizabeth Musick, CBOH was provided a notice of termination of their lease Monday.

The Whitehall School Board of Trustees voted in March to rehire Principals Hannah Nieskens and Britt McLean.

At a special meeting in April, the Whitehall School Board of Trustees received an audit report for the 2016-17 school year from Debbie Ouellette of Newland and Company.

Ouellette reported the Whitehall School Districts not only had a clean audit, but had the highest possible ranking they could receive. Whitehall Superintendent John Sullivan said there were a few little findings they would be taking care of, but it was the best audit the districts have had in years.

After serving the past three years on the board, Paul Shaw was sworn in for another term. Patti Drake was also sworn in to continue as the Clerk for the Districts.

Jeff Briggs was sworn into the School Board of Trustees in May.

For the second consecutive year, ACT tests scores are up at Whitehall High School.

High School Principal Hannah Nieskens said in July, the scores were better than 2016, which she said was a positive considering last year's class set a high bar.

"In fact, the 2017 WHS juniors did better than any WHS junior class since the ACT became a mandatory test for all juniors statewide in 2013," Nieskens said. "This year, the percentage of WHS juniors who achieved the ACT college readiness benchmark score increased on four of five tests - Math, Science, English, and Reading. The Writing subtest score held steady. The college readiness benchmark score indicates that a student has a 50 percent chance or better of earning a B or better on first-year college classes. "

The Whitehall High School Choir and Band shined in May.

Competing at the MHSA District Music Festival in Deer Lodge, Whitehall had a total of 13 students qualify for the State Music Festival May 5 and 6 in Missoula.

The Whitehall High School Class of 2017 graduated May 28 in Varsity Gym. The Valedictorian for the class was Braden Larsen. The Salutatorian for 2017 was Rabeca Kopf.

The Golden Sunlight Mine submitted an application March 31 to amend their operating permit, with the possibility of extending the life of the mine up to three years with the proposed underground Apex Project.

According to the BLM, the current workforce predictions for the project are for 50 mine employees and 100 contractors, a slight increase from the existing workforce.

The amendment would allow Golden Sunlight to conduct underground mining north of the Mineral Hill Pit. A legal noticed published in this edition of the Whitehall Ledger states, "GSM would construct three adits, creating 2.5 acres of new disturbance. Overall, an additional 90 acres north of the current permit boundary would be added to the existing permit boundary to cover the area in which the underground workings and road systems would take place. Approximately 1.3 million tons of ore would be produced along with 0.3 million tons of waste rock. The amendment would extend mine life by up to three years. The mine life extension may provide for additional opportunity to process off-site ore, mostly derived from legacy mining materials located within Southwest Montana."

Several famous athletes descended upon Whitehall in May for the 23rd Annual Kyle Petty Charity Ride Across America. Riders including Herschel Walker and Petty were at the event.

Ken and Tina Bates opened Stageline Pizza in April of 2017. The restaurant replaced the Chinese Garden in the building located at 605 West Legion in Whitehall.

Chuchos Tacos opened in June in Whitehall. The restaurant featuring tacos and other Mexican items moved to the Chief Motel later in the year.

A fundraiser for the Whitehall Community Pool in June raised over $5,000. The money raised at the event will be used for facility costs and maintenance at the pool located at 3 Yellowstone Trail.

The search for a missing Whitehall woman came to a tragic end June 27.

The body of 21-year-old Kirsten Ryerson was found Tuesday afternoon on Point of Rocks Road near Whitehall. She had died from injuries suffered in a 4-Wheeler accident.

According to the Montana Standard, the Montana Highway Patrol responded to a crash site Tuesday around 3 p.m. The Standard reported Trooper Ken Klapan had stated the crash had remained undiscovered until Tuesday because the vehicle had veered down an embankment about 100 feet from the road and was not visible from the roadway.

Jefferson County Sheriff Craig Doolittle said that Ryerson was last seen sometime the evening of Thursday, June 22. She was reported missing by her family June 23. Klapan told the Standard the crash happened June 22 between 8:30 and 9 p.m.

The 13th annual Black Tie Blue Jeans event in 2017 was once again a success, with over $27,000 being awarded to local organizations.

According to BTBJ Committee Member Jill Dove, roughly $19,880 will go to the Whitehall Chamber for events like Frontier Days, the Futurity, and the Christmas Stroll.

On July 6, residents felt a 5.8 magnitude earthquake in Montana.

According to the USGS, the epicenter of the 5.8 magnitude earthquake was around 33 miles Northwest of Helena, and seven miles southeast of Lincoln. A listing of significant 2017 earthquakes on the USGS website showed it was the largest earthquake of the year in the continental United States. The earthquake was felt as far east as Billings, as well to the west in Spokane.

Whitehall resident Darlene Olson was one of the many local residents to fill the quake and it's several aftershocks. Olson said she wasn't sure what was going on, but realized it was an earthquake after discovering several things had fallen off her shelves.

The largest aftershock was reported as a 4.5 magnitude on the Richter scale.

The Federal Aviation Administration and Montana Highway Patrol investigated a plane accident that took place the afternoon of September 21 in Whitehall.

According to Jefferson County Sheriff Craig Doolittle, a plane was apparently taxiing on the runway when it got away from the pilot and ran into a house at 36 S. Centurion Way. Doolittle stated no injuries were reported.

The Jefferson County Community Foundation awarded nine grants in October to local non-profits for a total of $18,794 at a special ceremony at the Borden's Building.

JVCF Co-Chair Millie Baycroft said this is the most money they have awarded in 16 years, and the endowment fund has grown to just under $235,000.

Baycroft said all the money donated to the JVCF not only goes back to the community, it says in the community as the fund grows.

In October, members of the Jefferson River Canoe Trail enjoyed a fall picnic in celebration of raising $270,000 during the year to fully pay for a new 30 acre walk-in fishing access and camp site on the Jefferson River near the Waterloo Bridge. The site had a temporary name of "Waterloo Grove". In December, Whitehall seventh graders picked the name "Lost Tomahawk" for the site.

"We're turning a private property into something that the public has access to... it's our backyard, not just one person's backyard," said JRCT board member Judy Aaker of Butte.

In November, a joint fundraiser between the Star Theater and Whitehall High School Drama department raised $1,400 for Toys for Tots.

""I was surprised and humbled by not only the amount of money we raised but the amount of donations we got this year. I thought the five days went great," theater manager Colton Anderson said.

In December, the Whitehall Town Council voted unanimously to reinstate suspended member Francine Giono-Janik. She had been suspended since November of 2016. 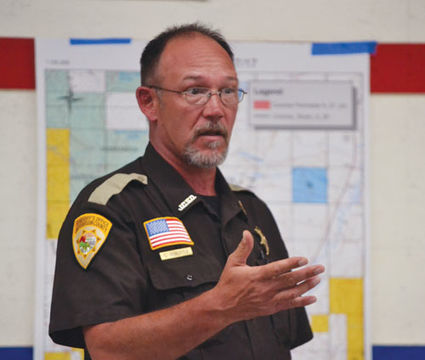