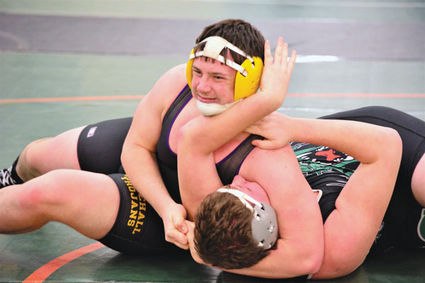 To say the Whitehall High School wrestling team had an impressive performance last Saturday would be an understatement. The Trojans shined with four individual champions and qualified a total of nine for the state tournament at last week's Southern B/C Divisional Wrestling Tournament in Columbus.

Trentin Walker (113 pounds), Connor Johnson (132 Pounds), Kayden Howser (205 Pounds) and Dawson Hoerauf (285 pounds) all captured Divisional Championships. It was the third consecutive championship for Johnson, and the second in the career for Hoerauf.

Dawson Powers finished in second place for Whitehall at 103 pounds. Other state qualifiers were Gage McMillan who placed fourth at 113 pounds, Mike Wilkinson who was third at 126 pounds, Dallen Hoover who finished third at 138 pounds and Riley Forcella who was third at 145 pounds.

Dalten Denny finished fifth at 120 pounds, and Gaten Wassberg was sixth at 185 pounds. 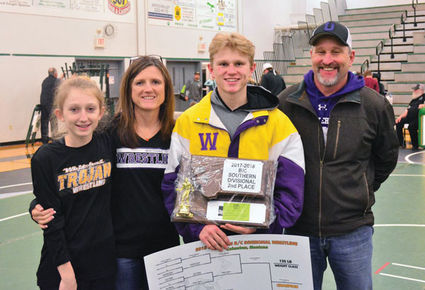 Connor Johnson. He is pictured with his sister Meagan, and parents Calvin and Michelle.

As a team, the Trojans finished second with 186 total points. Jefferson High School ended the day in first with 231 points. Townsend was third with 165.

"The second place finish was a testament to the total team effort the Whitehall wrestlers made," assistant coach Steve Sacry said. "The lead changed a number of times during the day, keeping the level of excitement high. There was a large contingency there in Columbus, which was huge to the wrestlers."

Sacry added the only downside to the tournament was an injury to Wassberg, who he said would have qualified for state as well.

The nine wrestlers will compete at the state tournament starting Friday morning in Billings.

"The state tournament is always an exciting tournament. The wrestlers that qualified will perform well and will make Whitehall proud," Sacry said.