It will be a battle of two of the top teams in the state this Friday night when the Whitehall High School girls basketball team travel for a road matchup against Townsend.

Both squads will enter the matchup with perfect 8-0 records.

While it had been 12 days since their last game, there were no signs of rust against the Lady Falcons. The Lady Trojans dominated the first quarter outscoring visiting Twin Bridges 24-5 on their way to the 40 point victory.

Head Coach Kelly Nieskens was impressed with his squad's defense in the opening quarter as well as out of halftime when they outscored the Lady Falcons 21-1 in the third.

"Our runs come with our big defensive stops. If we are able to get stops up front those turn into layups and that's how you get everyone involved," he said.

The dynamite trio of eighth grader Jada Clarkson, junior Asha Noyes, and freshman Brynna Wolfe who each ended the night in double figures scoring once again sparked Whitehall. Clarkson had a game high 20, Noyes had 15 points, and Wolfe added 12.

With several key players out due to injury, the Lady Trojans also had several bench players step up with solid performances including Ashlynn Ellison with eight points and Dalaney Scafani with five.

Nieskens said it was nice to have those girls who haven't consistently scored for the team get their feet wet on the varsity level, especially since the team was unable to play a junior varsity game.

Nieskens was also pleased with the way his team responded from a nearly two-week break.

"We had a long time off and now we are back into the grind. This game was a good start especially the way we started and finished," he said. 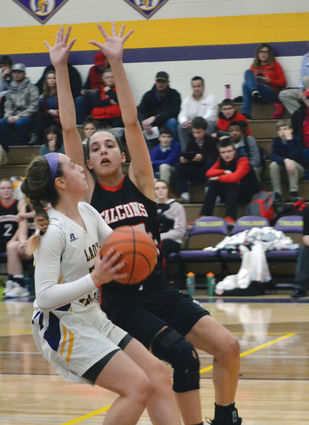 Jada Clarkson looks for the shot in action last week.

After leading 19-14 at the half against Manhattan, Whitehall would outscore the Lady Tigers 13-6 in the third on their way to the double-digit victory.

Wolfe led the team is scoring with 13, Clarkson and Noyes each had eight, Kendra Klapan had seven, Welker finished with five, Johnson had four and Ellison added two points.

Nieskens said the team has already hit their team goals for midway through the season and now they have another goal of being a team that will be playing in March.

"They are really starting to believe in themselves," he said.

The Lady Trojans will travel Saturday for a non-conference game at Missoula Loyola.