I think it is probably safe to say that nobody in my house is a morning person and the rides to work are usually pretty quiet.

Every now and then I will badger Shayla on the way to work with a bunch of random questions that drives her up the wall. She turned 13 on Monday so she is at the age where she is fussy all the time and over some of the stupidest things so the random questions really can light a fuse under her. Although it is kind of like poking a bear it can still provide some laughter for the rest of us in the car.

On a ride to work last week, I was asking her random questions and one of them is if she had ever eaten a "McRib" at McDonald's and she had not. I was actually glad the answer was no because the one and only time I tried one I literally threw it out the car window after my first bite. No, it was not good to litter, it was just that this shaped patty of processed meat I was eating was so awful I wanted to rid myself of it as quickly as possible and the best way to do this was out my friend's window. I'm sure that the sandwich still might be sitting on the side of the road 15 years later. I don't think those outside of employees will ever know what of it is truly made, but I'm pretty sure its is not a rib.

As much as I despise the McRib, I kept with the McDonald's theme for the next question and asked her if she had ever had a "Big Mac". I figured in 12 plus years she would have had to have one at some point, but her answer was also no. This truly did baffle me. By the time I was 12 or 13 I had probably eaten hundreds of Big Macs and Quarter Pounders, but she had never ordered one.

While trying to figure out how in the world she had never had two all-beef patties, special sauce, lettuce, cheese, pickles, onions on a sesame seed bun I remembered that I don't really take her to McDonald's all that often.

We used to go occasionally but she was still in the phase where she would get a Happy Meal and be content with a tiny cheeseburger or nuggets, and of course the tiny toy that brings joy to kids across America.

It's probably best we don't go there often because it is certainly not the healthiest option and probably not as popular as it once was. When I was growing up it was a rite of passage to have your birthday party at the golden arches and it was always an epic adventure.

Anytime I was with my grandparents we would always talk them into taking us to McDonald's even if it was for the apple pies when they used to throw them in the deep fryer, not the lame oven version you get these days.

My first year after college I worked at McDonald's and probably ate more of it then I should have, and it really burned me out on it for a while and that is probably another reason I don't go there as much anymore. It was back in the day before everything was made to order so there was so much wasted food that I would always have a ton of stuff to eat, take home, give away, and throw out of a window.

There are so many better places to get a burger than McDonald's, but just writing this really makes me want a Big Mac and to take Shayla to get one so that is exactly what I'm going to do.

If I've had a Big Mac in downtown Moscow, Russia there is no reason that Shayla can't experience it at least once.

Hopefully, she won't throw it out the window. 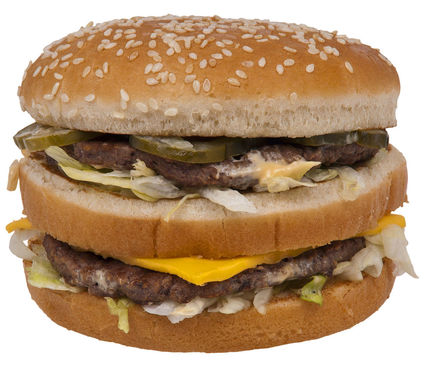