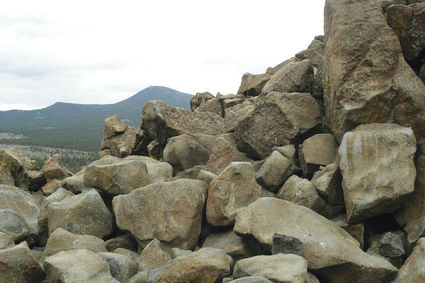 The Continental Divide runs through Montana, separating the mountains and glaciers on the west from rolling plains to the east. Much of the state is built on a bed of rock that dates back more than a billion years, to the Precambrian, or the earliest era in Earth's history. The geology of Montana has shaped the state, from the mountain ranges that draw hikers to Glacier and Yellowstone National Parks to mineral deposits that drew prospectors during the Gold Rush to the vast plains that have long supported hunting and agriculture.

1. GRANITE PEAK: Located in the Beartooth Mountains of southern Montana, Granite Peak is the highest point in the state at 12,799 feet above sea level. It's one of the most difficult summits in the United States, along with Mount Rainier in Washington and Denali in Alaska, and the granite that gives it its name dates back more than 2.7 billion years.

To reach Granite Peak, would-be summiteers must hike a challenging 12 miles, typically over the course of two days. Many hikers camp on the ominously named Froze-to-Death Plateau. Reaching the summit itself requires a couple hundred feet of climbing up a vertical rock face.

2. RINGING ROCKS: This large jumble of boulders has a unique feature: When struck, the rocks produce a resonant chime. The Ringing Rocks, as they're known, lie in the vent of an ancient volcano. Millions of years ago, a unique formation of igneous rock emerged as the magma that once sat in the volcano's vent cooled. As the ground shifted, froze, and wore away, the rocks were exposed to the surface as we see them now. It is believed that the ringing is a product of both the composition of the rocks and the way they are arranged. If you remove a boulder from the pile, it will no longer ring when hit.

3. MEDICINE ROCKS STATE PARK: East of the Continental Divide, Montana's landscape may not have towering peaks and dramatic waterfalls, but it holds impressive stone structures of its own. Medicine Rocks State Park is home to otherworldly sandstone structures that are filled with holes and tunnels created by millions of years of erosion. The Medicine Rocks are a sacred place for many of the Indigenous peoples of the Great Plains. Many tribes lived in or visited the site, including Cheyenne, Crow, and Sioux. Art and artifacts dating back thousands of years have been found across the park's 330 acres.

4. PTARMIGAN TUNNEL: At the Ptarmigan Wall in Glacier National Park, hikers are faced with a choice that will be familiar to fans of Lord of the Rings: going over the mountain, or going under it. Luckily the latter option doesn't require traversing the Mines of Moria, but instead a stroll through the Ptarmigan Tunnel.

This 200-foot-long tunnel was carved out of the surrounding rock in 1930, using a combination of steel jackhammers and dynamite. It was created to give hikers an easier way to access some of the park's sweeping vistas. The tunnel's south entrance is marked by views of Ptarmigan Lake and the sculptural valley between the Ptarmigan Wall and Crowfeet Mountain. After passing two sets of angular steel doors that were installed in 1975, hikers are rewarded with views of Natoas Peak, Crosley Ridge, and the Belly River.

5. WORLD MUSEUM OF MINING: During the gold rush of the mid-19th century, many people came to Montana in search of riches and glory. Stores of mineral resources drew prospectors into the mountains. By the turn of the 20th century, Butte was dubbed "the richest hill on Earth," and mines dotted the city and its surrounding area. Today, the World Museum of Mining sits on the grounds of one of those mines, and has many of the mine's original structures on display. In the mine yard, dozens of exhibits showcase equipment used between the 1860s and the 1970s. There is also a memorial structure, made of black granite slabs that have been inscribed with the names of 2,500 people who died in mining and construction accidents.

7. GRANITE GHOST TOWN: Though some mining towns survived beyond the Gold Rush, many were abandoned as the region's mineral resources dwindled. The town of Granite, once the state's largest silver mining camp, is now a ghost town. In its heyday, the town's mine produced almost $300,000 a year in silver-equivalent to some $10 million today. Saloons and hotels filled the town, which also had a baseball field, a roller-skating rink, a hospital, and a bobsled run.

Today, Granite consists of a few buildings lining the main street and the hulking structure that made up the mine. It officially became a ghost town in 1969, when its last remaining resident, Mae Werning, passed away.

8. BERKELEY PIT: Other remnants of the mining boom are not quite as easily explored as a ghost town. A former open-pit copper mine in Butte is now filled with more than 40 billion gallons of acidic water, heavy metals, and unique microorganisms. The Berkeley Pit is 7,000 feet long, 5,600 feet wide and 1,600 feet deep. Approximately 1.5 billion tons of material were removed from the mine from its opening in 1955 to its closure in 1982. In the unforgiving environment of the former mine, new fungal and bacterial species have been found. Intense competition for limited resources led to unique adaptations: Some of these microscopic lifeforms produce their own toxic compounds to survive.