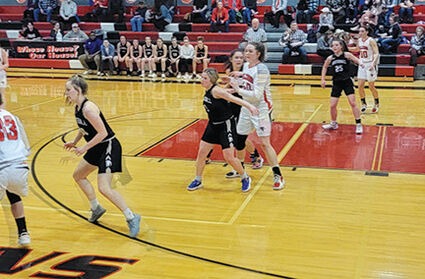 GETTING TOUGHER: The Lady Trojans lost to the Falcons 56-39 but are getting stronger each game.

While the Whitehall Trojan girls and boys basketball teams took losses to the Twin Bridges Falcons Friday, January 7, they did so with lots of heart of perseverance.

Girls coach Mecklin Davis said he was actually very excited for how well the girls played.

"We are learning to compete; compete for each possession, each point," said, adding that Maxine Hoagland, Lindsay Briggs, and Haley Briggs played really well against the Falcons, showing they are true leaders on the court.

"This was only Haley's second game of the season. I'm very encouraged by their plays and leadership," Davis said....