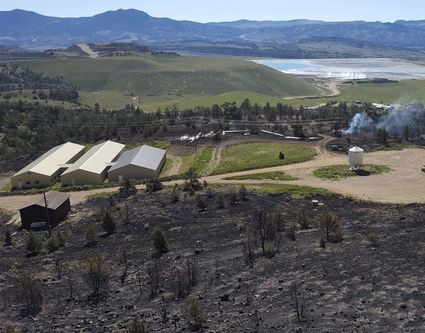 Pictured is the aftermath of a fire that started Saturday on Golden Sunlight Mine property. Courtesy photo

The hard work of local fire departments and other agencies has kept a 32-acre fire at the Barrick Golden Sunlight Mine in Whitehall at bay.

According to mine General Manager Dan Banghart, fire departments from Whitehall, Harrison, Boulder, Three Forks, Twin Bridges and United State Forest Service all responded to the wildfire that started Saturday afternoon on mine and BLM land.

"We are still keeping an eye on it, but overall it is looking pretty good. We are looking to call it 100 percent controlled by the weekend," Roderick said.

Roderick reported 15 USFS service fire fighters were on scene at the height of the fire.

Banghart said the cause of the fire was a down transmission line that was probably the result of high winds they were having. Banghart thanked the departments for their work, as well as workers from Northwestern Energy who helped restore power. Banghart said power was down from roughly 1:30 p.m. to 8:30 p.m. He also thanked DNRC for helping out at the fire that he said came close to, but did not affect any structures at the site.

"They kept it at bay," he said about the response to the fire.

Banghart also praised employees at the mine for their work during the fire.

No injuries were reported.