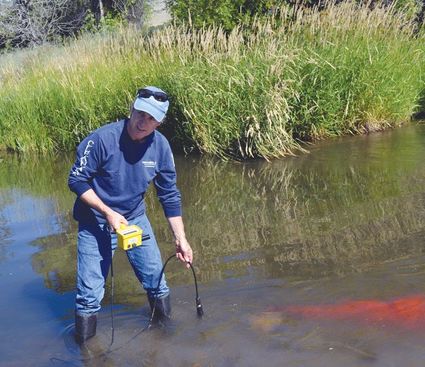 (Editor's Note: This is the first in a series of articles focusing on current and future projects on the upper Jefferson River.)

Five years ago, the lower 4.6 miles of the Jefferson Slough was reported as the uppermost point of Eurasian Watermilfoil in the Missouri River Watershed.

Since that time, the Jefferson River Watershed Council (JRWC), local landowners, Jefferson County, government agencies and others have been working towards the goal of 95 percent reduction of the noxious weed within five years, with a long-term goal of eradication.

Yesterday was a huge step towards that goal, with the initial work for the first herbicide application being placed in the slough.

According to Jefferson County Weed Coordinator Jill Allen, a dye treatment was placed in half-mile increments along the slough Tuesday to indicate what the application rate would be for the herbicide.

She said they would be doing flow monitoring so they can indicate the parts per million of the herbicide they would be using for the application taking place this week. Tom Moorhouse of Clean Lakes Inc., was applying the dye treatment, and said the rate of dye will verify what the flow is, and getting the concentration of herbicide right depends on the flow of water.

The herbicide being used in the application is Cascade, which is a product of UPI, based out of King of Prussia, PA. UPI employee Craig Smith was on-hand Tuesday, and said 90 to 95 percent control would be a very reasonable expectation.

Allen said they did hand pulls of the milfoil in 2012, 2013 and 2014; and while the efforts seemed to be successful at first, when they re-valuated, it wasn't significant enough.

The funding for the herbicide application comes from money obtained from the 2013 session of the Montana Legislature.

Ted Dodge, Watershed Coordinator for the JRWC, said they need to knockout the milfoil before they start work on the Jefferson Slough channel relocation. Construction on the relocation is expected to begin in fall or winter.

According to the JRWC 2015 Annual Report, the rapidly spreading Eurasian Milfoil out competes native plans and impacts irrigation and hydropower facilities, recreational activities, and wildlife habitat.

Dodge said the milfoil was first discovered in 2011, right at the time they were starting to address flooding and also sediment issues in Big Pipestone Creek.

"You could make a case the sediment coming down the slough was a perfect nursery for the milfoil," Dodge said.

Allen added they want to get the milfoil knocked back so it lessons the risk of cross contamination in the new stream bank.

The annual report also states that it is estimated that the Jefferson Slough contributes about 17,000 pounds of Eurasian Milfoil fragments annually to the Jefferson River, and these fragments are establishing new infestations in sections of the Jefferson, Madison and Missouri Rivers.