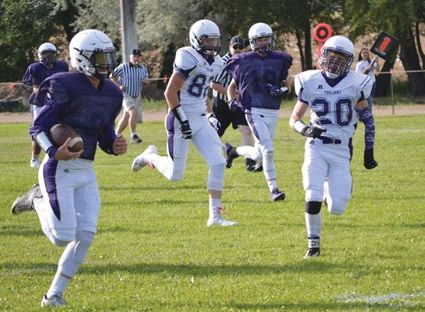 Whitehall/Harrison quarterback Braden Larsen (left) finds a hole in the defense, while Connor Johnson (20) closes in during the annual Trojan Scrimmage last week

After two weeks of fall camp, the Whitehall/Harrison High School football team is ready to take the field.

The Trojans will open their 2016 season Friday night at home when they host Sweet Grass County (Big Timber). The kickoff is set for 7 p.m.

Whitehall currently has 25 out for this year's team, but head coach Dan Lacey said the number could grow once school starts August 31.

The Trojans will return seven starters on offense, including senior quarterback Braden Larsen, who threw for 1,953 yards and 17 touchdowns in 2015. He is also the squad's leading returning rusher with 347 yards and six touchdowns last year.

Lacey said Larsen has been very coachable in his time as a Trojan.

"I wouldn't want anyone else running our offense other than him. He does a great job of keeping his receivers happy by spreading the ball around. His knowledge of the offense is beyond his years and he is as classy as it comes as a person. He does so much for us on the field, but he is an even better person off the field," Lacey said.

Lacey said the amount of time Larsen and Simon put into the team is second to none.

"I remember there 8th grade summer going into freshman year, we started morning lifting session and they would be the only two there," he said. "Those two kept coming back for more and more. Most kids get burnt out but not them, they continued to get better and better."

Lacey is aware the team will have a dangerous passing attack, but said they still need to be able to run the football and manage the clock if necessary in a game.

"That has been a big focus for us during camp. We have a lot of weapons on the passing game and I'm really excited to watch Braden utilize his weapons," Lacey said. "Our running game is a lot different than others. Our passing game opens up our run. We need to use our running attack to keep defenses honest and not constantly dropping 7 or 8 in coverage."

On the defensive side of the ball, the Trojans will return four starters from last years team. Lacey said the teams defensive success will come with the play of the defensive line.

"We have a lot of speed at defensive end with Colton Noyes, Garrison Shaw, and Jake Flynn," he said.

Lacey said the teams annual fall scrimmage last Thursday was a way to move some guys around and see where they fit defensively.

"Dawson Hoerauf has had a great fall camp playing our nose tackle, and it was nice during the scrimmage to get some looks at other guys there to see what we have for depth," he said.

Looking to the game Friday night against the Herders, Lacey said he is concerned with the opposition's misdirection run game.

"They run the ball really well and will do whatever they can to control the clock and keep us off the field," he said. "What concerns me with their defense is us trying to do to much and trying for the big play rather than taking what they give us."

Lacey feels the Trojans receivers will matchup well against the Big Timber linebackers and secondary.

"If they try to double team Andrew we have so many weapons that can best one on one coverage which gives us a big advantage in that specific area," he said.

As far a team goals form the season, Lacey said the coaching staff wants all of their student athletes to be in good standing grade wise.

" On the field, we know that if we control what we can control we will be happy no matter what happens throughout the season. Our focus right now is on Big Timber. We had a great opportunity to win that game last year but we came up short. That left a sour taste in our mouth," he said. "Our kids are hungry and they will be ready to go. " 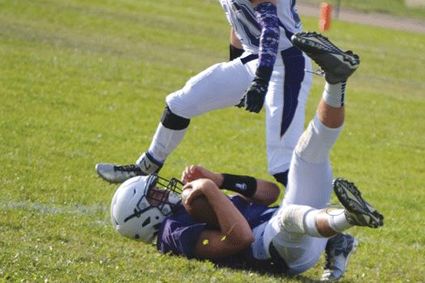 Andrew Simon holds onto the ball after a leaping catch.