Trojans demolish Herders, Columbus next up 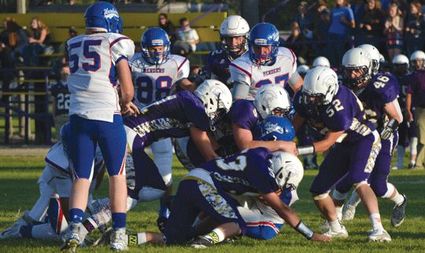 The Whitehall pitched a shutout last Friday against Big Timber.

There was no doubt about this one.

The Whitehall/Harrison High School football team started strong last Friday night in their first game of the season against Sweet Grass County, and never looked back in the 40-0 victory.

The Trojans had a monster game from senior quarterback Braden Larsen who finished with six touchdown passes, and also dominated with a swarming defense that pitched a season opening shutout.

"I love what I saw, but we still need to clean some things up," head coach Dan Lacey said.

After a three and out on the opening possession of the game, Whitehall would quickly get the ball back after a Herder turnover. They would score their first touchdown of the season with 7:50 left in the opening quarter when Larsen connected with junior standout Wyatt Alexander for a 21-yard touchdown.

The Trojans dominated the second quarter behind the dyamic duo of Larsen and Andrew Simon.

Larsen found Simon on a four-yard touchdown pass with 10:32 left in the second, and would find him again minutes later. The two connected for their second touchdown of the game with 8:11 left in the half on a 52-yard scoring strike. Simon finished the game with six catches for 112 yards.

Whitehall would close out the scoring in the first half when Larsen connected with junior Braden Smith for a 15-yard touchdown.

The Trojans would score the only points of the third quarter when Larsen once again found an open Alexander for a 13-yard touchdown. Alexander finished the game with 124 yards on seven catches.

Following the game, Lacey praised Alexander for his performance.

"He's had the ability all the time, we were just waiting for it to show up. He really bought in this summer and got a lot of reps, and it shows. That kid is gifted. He's a special player and does a lot of things for us. I'm excited to keep watching him," Lacey said.

Sophomore Sawyer Keener scored the only points of the fourth on a 14-yard touchdown pass from Larsen, who ended the night 23 of 40 passing for 386 yards.

Lacey said the team played awesome in the first half, but said they need to tighten some things up from the second half, and do a better job blocking on blitz pickups and with the run game.

Offensively, Lacey said they had some really good play, but there were a couple of possessions where they had deeper downs and distance, and that's not a situation the team wants to be in.

"We like second and six, we can do a lot of different things with that and it keeps teams off balance," he said.

On the defensive side of the ball, Lacey said that is the best performance he has seen from the front in a long time.

"Kudos to those kids for putting in the time," he said.

The longtime Whitehall coach praised players for playing different positions than they had in the past. He said they were asking Smith to play both linebacker positions and at defensive end, and Colton Noyes had moved from the defensive back field a year ago to playing defensive end.

"Colton stood out. He had a great game," Lacey said.

This Friday the Trojans will play their first road game of the season when they battle Columbus (0-0).

"They are physical and they are going to run the ball hard. They are going to try and beat us with play action. We have to tighten up our corner play. On offense, we have to limit turnovers," Lacey said.