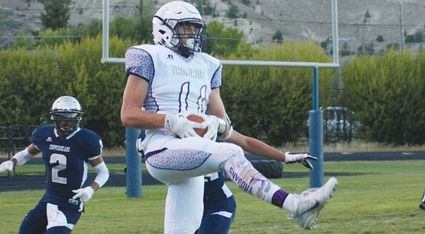 Andrew Simon snags a jump ball near the end zone for a huge gain during the first half last Friday against Anaconda.

It wasn't easy, by no means was pretty, but the Whitehall/Harrison High School football team displayed the heart of champion and dug deep to get their third consecutive win to start the season Friday night at Mitchell Stadium in Anaconda.

After not giving up a point in their first two games of the season, the Trojans (3-0) would find themselves behind 27-21 at halftime. The defense quickly recovered and was able to pitch a shutout in the second half of the thrilling 28-27 victory over the homestanding Copperheads.

"We've got a great group of guys that handled a lot of adversity. We had a to...