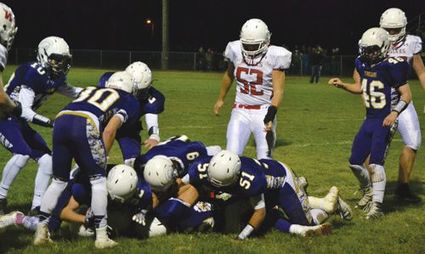 Going into Friday night's home game against Three Forks, Whitehall/Harrison High School Football Coach Dan Lacey said his team was eager to get back onto the field after a tough road loss last week. He was right. The Trojans (6-1, 2-1 Southern 5B) came out of the gates quickly, and scored 36 points in the first quarter of the 50-6 win over the visiting Wolves (0-7).

"We really executed our game plan tonight. We understood we had an opportunity to bounce back from a tough loss last week and we had to jump on them early to do that. The offense and defense played well. I'm happy as heck for these kids to bounce back and to come out and show what they are capable of," Lacey said.

It didn't take long for Whitehall to find the scoreboard. On their first drive of the game, senior quarterback Braden Larsen connected with Wyatt Alexander for a 15-yard touchdown with 10:08 left in the opening quarter. The Trojans missed the extra point, but would quickly find the end zone again after a Three Forks fumble when Larsen found an open Andrew Simon for a nine-yard scoring strike. Larsen connected with Alexander on the two-point conversion to put the Trojans up 14-0 with 8:38 left in the quarter.

Larsen would connect with Alexander again on Whitehall's third drive, this time for a 18-yard touchdown reception. The successful point after Touchdown by Andrew Simon pushed the lead to 21-0 with 6:40 left in the first quarter.

Simon would find the end zone moments later, this time when he stripped a Three Forks ball carrier and ran the ball back 50 yards for a touchdown with 5:48 left in the opening quarter. Alexander would run in the two-point conversion to up the lead to 29-0.

After a Three Forks kick return for a touchdown, Whitehall would end the first quarter with another score, this time on a three-yard touchdown run from Sawyer Keener with four seconds left in the first.

Connor Johnson scored the only points of the second quarter on a five-yard pass from Larsen with 4:23 left in the half to push the lead to 43-6.

The Trojans scored the only touchdown of the second half on a five-yard pass from Larsen to Lane Buus with 10:10 left in the fourth quarter.

Larsen finished the night 17 of 24 for 223 yards and five touchdowns.

Lacey said his team was hungry going into the game, and knew they had the expectations to fill from the tough loss last week against Manhattan, but could not take any opponent lightly. He said Three Forks is a quality football team who made some good plays during the game.

"You have to be ready to go every week. If they come out and get a score and look to get on us early – it can change the whole game," he said.

Whitehall will look to pick up their seventh win in eight games this season next Friday night against Libby (1-6). The game is scheduled to take place at Washington-Grizzly Stadium in Missoula.

Lacey said going into the game, Whitehall just needs to stay that course of what they do and focus on cleaning some things up. He said they would look at the film from the Three Forks game to identify the weakness areas they need to work on against the Loggers.

(Editor's Note: Read more about the Trojans upcoming trip to Missoula on the front page of the October 12 edition of the Whitehall Ledger).