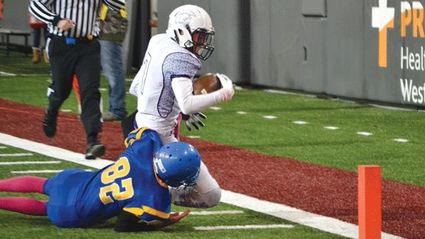 Wyatt Alexander stretches for the touchdown in Whitehall's 59-7 victory Friday night over Libby.

Just moments before kickoff of Whitehall/Harrison's game October 14 against Libby a storm moved in and rain began to fall onto the FieldTurf at Washington-Grizzly Stadium in Missoula. Minutes into the game the rain would dissipate, but it did not stop a frenzied storm on both sides of the ball by the Trojans, who for the second week came out of the gates early and never looked back in a convincing 59-7 neutral site victory.

Whitehall (7-1, 2-1 Southern 5B) would score a total of seven touchdowns in the first half. Andrew Simon scored three times, Braden Smith scored twice, and Braden Larsen and Wyatt Alexander each scored one touchdown. Along with his rushing touchdown, Larsen also had five touchdown passes in the half. The Trojans jumped off to a quick 20-0 lead after the first quarter. After a Logger touchdown early in the second quarter, Whitehall would end the half with 27 consecutive points.

"The kids were hungry. They knew we needed to get some things straightened out and they came out and executed they way we thought they could, and the way they knew they could," head coach Dan Lacey said.

Whitehall capitalized on four Logger turnovers in the first half, including interceptions by Simon and Lane Buus.

Lacey said the turnovers were huge for the field position battle. He said they were getting turnovers on Libby's side of the field and getting short fields to work with.

"We are tough when he have 30 yards and in to go because we can do a lot of things to make big plays," he said.

Lacey also praised the play of his offensive line against Libby and throughout the season.

“The o-line has worked so hard this year with processing all the information we have given them. It truly is the hardest position to play in our offense due to all we ask of them. The scheme is really complex and they have soaked up the information and played very well throughout the year,” he said.

Sophomore Connor Johnson scored both Whitehall touchdowns in the second half, the first on a pass from fellow sophomore Max Feight.

Moments after the victory at the University of Montana stadium, Lacey said he could not say enough about the fans who made the trip.

"It was an awesome atmosphere to watch. We brought a lot of fans here. It's a long ways and I can't thank them enough," he said. 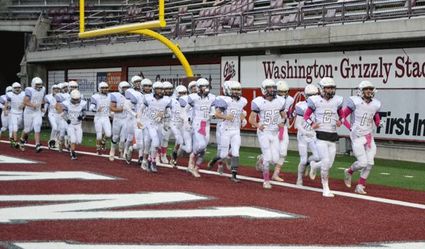 The Whitehall/Harrison High School football team warms up prior to their game October 14 at Washington-Grizzly Stadium in Missoula.

The win in Missoula set up a huge home game Friday, October 21 against Townsend.

Both teams come into the game with 2-1 records in the Southern 5B Conference. Manhattan is in first-place with a 3-0 record.

Lacey said it's a huge game and the kids know just how important it is for the playoffs.

"If we don't win we are probably not in. So they know it's a playoff game and we've got bring it," he said.

The senior class members of the team will be recognized prior to the game.

"Just talking about it makes me tear up. Those kids have worked so hard. They put in so much time and it's paying off," Lacey said.