The Whitehall/Harrison High School football team picked an opportune time to play their best football of the season.

With a spot in the playoffs on the line last Friday night at home against Townsend; the Trojans scored 21 points in both the first and second quarters on their way to a 56-12 rout of the visiting Bulldogs.

Following the game, Whitehall Head Coach Dan Lacey said it was by far the teams best half of the season.

"We executed our game plan to a 'T'. Everything we were doing was working. Offense, defense, and special teams looked great," he said.

It didn't take long for the Trojans to find the end zone. Whitehall scored the first points of the game on a 14-yard touchdown pass from Braden Larsen to Braden Smith with 10:18 left in the opening quarter. Larsen would rush for the next two touchdowns, the first on an eight-yard run with 5:21 left in the first. Following a Townsend fumble, he would find the end zone again, this time of a six yard run with 2:50 left in the quarter. The successful point after touchdown by Andrew Simon pushed the lead to 21-0.

Whitehall would score three more touchdowns in the second quarter, the first on a 25-yard Braden Smith run with 11:00 minutes left in the half. Larsen would get his second and third touchdown passes of the game on the next two Trojan drives, both of them to Wyatt Alexander. Larsen found an open Alexander for a 61-yard scoring strike with 5:12 left in the quarter, and reconnected with him for a 27-yard touchdown with 1:40 left in the opening half.

The Trojans would score twice in the second half, the first on a 30-yard Smith run with 1:52 left in the third quarter. They scored the final points of the game with 9:26 remaining on a nine-yard pass from Larsen to Lane Buus. 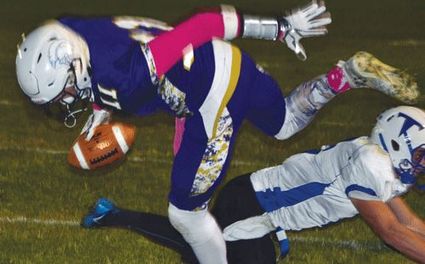 Lacey praised his team not only coming out of the gates quickly, but their preparation during the week for the Bulldogs.

"This is awesome. These kids have worked so hard. I couldn't be more proud of them. Our seniors led the way and our young guys followed. We had great leadership. We talked before the game about how these guys are family and when you are as close as they are, crazy things can happen. What happened tonight shows how tight this group is and how hard they will play for each other," he said.

Looking to next week, Lacey said Cut Bank is a run heavy team, but he thinks his team will be ready to go and they will come up with a good game plan.