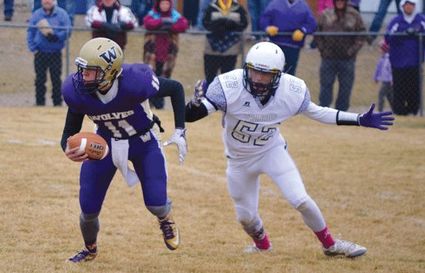 Colton Noyes gets after the quarterback in action Saturday against Cut Bank.

There is something special about the heart and determination of the 2016 Whitehall/Harrison High School football team.

Facing off against a gritty and talented Cut Bank High School team, the Trojans (9-1) saved the best for last in a thrilling 17-14-road victory in the first round of the MHSA Class B Playoffs.

"We knew it would be all of us. We knew it would take every single one of us. I can't say enough about these kids and my staff. We did so much to be able to do what we did today," head coach Dan Lacey said moments after the victory.

Whitehall would not find the scoreboard until 4:00 left in the third quarter when senior quarterback Braden Larsen went straight up the middle on a one-yard run. Andrew Simon's extra point was wide left, and the Trojans trailed, 7-6.

The Wolves would not wait long to answer, and quickly scored returning the ensuing kick to push the lead to 14-6.

The Trojans quickly dug deep, and would pull within two with 2:06 in the third on a three-yard run by junior standout Braden Smith. Whitehall was able to tie the score on the ensuing two-point conversion.

The Trojans appeared to take the go ahead score on a touchdown from Larsen to Wyatt Alexander with time running out, but after a lengthy huddle by the referees, a flag was issued on the Trojans and the call negated what had appeared to be the game winning play. Whitehall's fourth-down attempt to win the game with three seconds remaining fell short to send the game to an extra few minutes of play.

As had been the case for the first sixty minutes of play, the Trojans defense stepped up huge on the first possession of overtime and stopped Cut Bank from finding the scoreboard.

One of the huge contributors for Whitehall was senior linemen Colton Noyes.

Lacey said Noyes did so much for the Trojans on the defensive front.

Noyes said he was so happy about the way the team stayed in unison.

"We just stayed together, and we just played as a family," he said.

"After the huge defensive stop in overtime, senior Andrew Simon was ready for a chance to redeem himself after missing an extra point in the third quarter.

"I knew I had to keep my head down and I've got to get it through the uprights," Simon said.

In a game that might have seemed to unfold like a script from a movie, Simon discussed his team's willingness to fight until the end.

"We've just got a lot of heart. You can beat us down, but we will always be back."

Whitehall will next play Saturday at Ronan with a chance to advance to the semifinals of the MHSA Class B Playoffs.

Simon said he couldn't wait for the opportunity. Noyes said he is jacked for the next game.