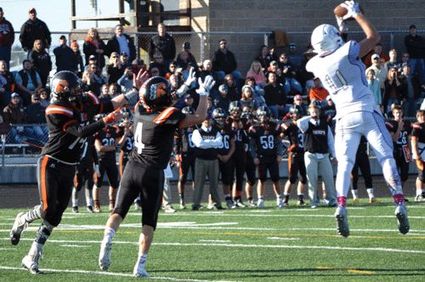 Andrew Simon leaps to catch a Braden Larsen pass in the fourth quarter of Whitehall's 40-26 quarterfinal win over Ronan. Simon would end up taking to the end zone for a key touchdown.

The Whitehall/Harrison High School football team is one win away from a spot in the MHSA Class B State Championship game.

The Trojans (10-1) will look to advance to the finals when they once again will make a long trip to face off Saturday against Eureka (9-1), in a game scheduled to kickoff at 1 p.m.

Whitehall earned a spot in the semifinals with a 40-26 road victory over Ronan. The Lions avenged their only loss of the season with a 43-8 victory last Saturday over Shelby.

On the defensive side of the ball, Trojans head coach Dan Lacey said the team must control the Eureka running game because it sets up their offense.

"He is very athletic so we have to make sure we do a good job containing him," Lacey said.

When Whitehall has the ball, Lacey said they would face a defense that is both aggressive and has played multiple formations with man under cover two, as well as cover four.

"They are affective at both," he said.

Both teams will enter the game with top five offenses and defense in Class B.

"So on paper the matchups are awesome," he said.

Much like they have all season, Whitehall will spend the week with an extreme focus on the upcoming matchup and will not be looking ahead.

"Our goal each week is to out prepare the opponent. I truly feel preparation at this point in time is so crucial to success on Saturday. If we continue to keep that goal in mind success will continue to follow," he said.

For the third straight week, the Trojans will find themselves on the road in a playoff game, this one 307 miles from Whitehall.

Lacey said some people tend to use a road trip as a reason not to be ready for the game.

"We prepare each game the same. We have our routines set up and the players know the expectations and what we expect from them," he said.

"The fans are unreal. The following we have I so awesome. It's so special to see the community take in our team. We appreciate them and are thankful," he said.