The Whitehall Trojan football team is making local sports history in an historical sports year, and demonstrating character at a time when true character seems to be lacking.

In an era when millionaire ego-driven, chest-thumping athletes lusting for attention appear to dominate the mercenary and narcissistic empire of professional sports, it was uplifting – even heartwarming – to witness Zobrist's sheer unadulterated happiness. It would be nice if each of us, at least once in our lives, experienced that kind of joy.

I would also like to point out to my good friends Arcylle and Paul Shaw that the Whitehall Trojan football team has won more playoff games the past two weeks than the New York Yankees have won since 2013. You have no idea how much delight I take in writing that previous sentence.

Speaking of the WHS Trojans, I had the good fortune of seeing the Trojans beat Ronan on Nov. 5. It was a great game, on a beautiful day, with the spectacular Mission Mountains framing the eastern sky.

The Trojans were up 28-6, but Ronan rallied to make the score 28-26 with a chance for a two-point conversion and a tie game. The Trojans and their fans – and the Whitehall game-day fan support for a distant three-hour trip from Whitehall was very impressive – were stunned by the Ronan comeback. The Ronan players were fired up. The Ronan fans were fired up. Even the game's public address announcer was fired up.

In the book "Talk About a Dream," a mythical WHS football team overcomes adversity, apathy and irrelevancy to win a state Class B football title. The book is about family, community, faith, and finding your place in the world through dedication and determination.

Yeah, and it's about football. But the football in "Talk About a Dream" is fabricated. The 2016 WHS football team is authentic. The WHS talent and playmaking dominated the first half. Grit and character were on display in the second half. That same grit and character had to have been evident in the overtime win the previous week in Cut Bank.

Last week the Trojans stopped Ronan on that two-point conversion. Ronan never threatened again. WHS played outstanding the rest of the way for a convincing 40-26 win. The 10-1 Trojans have won two playoff games for the first time since 1982, and are one win in Eureka away from playing for a state Class B championship. There are two Whitehall father-son sets in which the father played for the 1982 WHS playoff team and their sons are now part of the 2016 WHS resurgence (Mark and Erik Reinschmidt and Ed and Andrew Simon).

Tell you what, these kids can play. A couple of those Braden Larsen passes to Wyatt Alexander and Andrew Simon last Saturday reminded me of Joe Montana throwing to Dwight Clark. Current WHS players may not know about "The Catch" but their parents probably will. Incidentally, "The Catch" occurred in 1982.

I heard some folks encouraging Braden to have "patience" as he roamed the field looking for open receivers. Man, the only way he could have been more patient was if he sat back in the pocket on a lawn chair sipping Earl Grey Tea and chatting absently about an upcoming current events quiz. 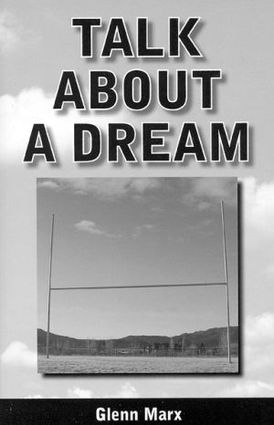 In his book "Talk About A Dream", former Whitehall Ledger Publisher Glenn Marx writes about a Trojans football team capturing the Class B Football title.

Anyway, the 2016 WHS Trojan team is well coached, skilled at skill positions, steady up front, and knows how to win. It takes every kid on a team to win playoff football games, and every Trojan contributed in that victory in Ronan. More importantly, every Trojan plays with pride and character, and they conduct themselves with character and pride. Whitehall should be – and is – proud of these kids.

The Trojans need to win two more games to be state champions. And that's the goal. A state title. At this point in the season, nothing less should be acceptable.

But no matter what happens on Saturday in Eureka or the week after that, the WHS football team and coaches can forever realize that they made themselves, their families, their school, and their community proud of their efforts, their integrity, and their accomplishments.

Talk about a team.