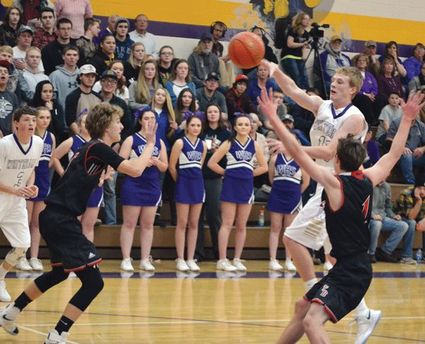 Max Feight gets off the pass last night against Twin Bridges.

The Whitehall High School boy's basketball team shook off a slow start on their way to a 66-53 home victory Tuesday night over visiting Twin Bridges.

After trailing at the end of the first quarter, Whitehall (4-1, 1-0 5B) was able to gain a sizeable lead in the second quarter on their way to the home win. Head Coach Zach McLean said with the exception of a win over Three Forks, his team has gotten off to slow starts and not come out ready to play. He said on Tuesday that they did not come out with energy.

Junior Wyatt Alexander put Whitehall up early Tuesday when he drained a deep three just seconds into the game. It would be an outstanding first two quarters for Alexander, who keyed a huge second quarter surge on his way to 12 points at the break.

Whitehall would never get more than a three-point lead in the opening quarter. After trailing 6-3, Twin Bridges closed the first strong and outscored the Trojans 13-8 to take a 16-14 lead.

The second quarter was a back and forth affair, before a 9-0 Whitehall run which gave them a 35-26 lead with 1:55 remaining after a basket by sophomore Max Feight. The Trojans took a 37-28 lead into the break. 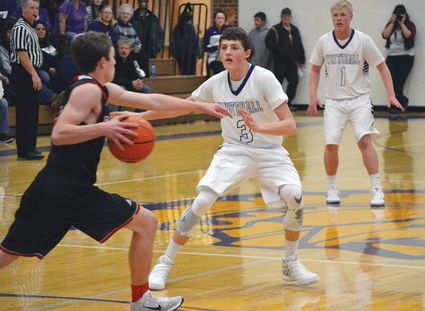 Wyatt Alexander focuses on defense in a win Tuesday night. He had 20 points in the victory.

Feight would push the lead to 12 in the opening minutes of the third quarter when he buried a three from the corner. Whitehall would increase the lead to 50-35 with 2:50 left in the third led by the play of Braden Larsen, who scored double figures in each half on his way to a game high 21 points. Twin Bridges would cut the lead to eight late in the fourth, but it was all Whitehall after that as they cruised to a 66-53 win. Alexander who scored first and last baskets for the Trojans finished his night with 20 points.

McLean lauded the play Alexander against the Falcons.

"That's the Wyatt we need," McLean said moments after the game. "He's put some time in the gym and it is paying off."

Senior Colton Noyes also had a big night for Whitehall finishing with nine points. Feight and Andrew Simon each had eight.

The Trojans will not have much time to rest with a game scheduled against Manhattan Thursday night in Varsity Gym.

"We need to get off to a good start. We need this league game at our own place," McLean said.