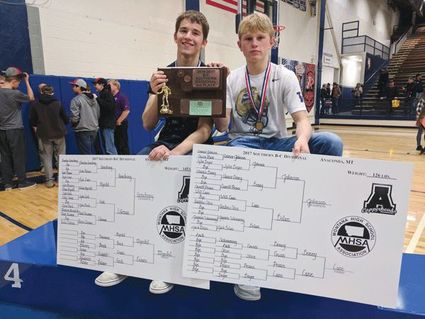 Braxtyn Amrstrong and Connor Johnson both finished first at the Southern B/C Tournament in Anaconda.

The Whitehall High School wrestling team did not disappoint at last Saturday's Southern B/C Divisional Tournament in Anaconda.

The Trojans had two individuals finish first, three place second, and finished third as a team.

Connor Johnson (126 pounds) and Braxtyn Armstrong (145) both defended their divisional championships. In the finals, Johnson defeated Jack Dolan of Townsend 6-2. Armstrong won a 7-0 decision over Robbie Coleman of Columbus.

Armstrong said after winning the divisional tournament in 2016, it motivated him to set the same goal this year.

"Nothing felt better than finishing...