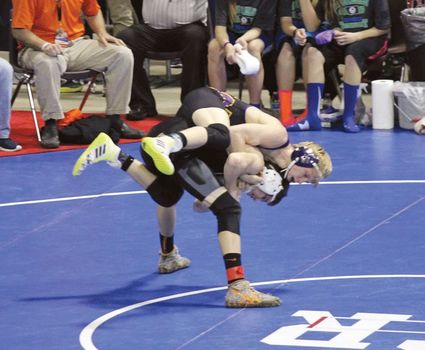 Connor Johnson wrestles against Eureka's Hank Dunn in the quarterfinals.

The Whitehall High School wrestling team sent seven wrestlers to last week's state tournament at the MetraPark in Billings - – all seven walked away from the Metra Park Arena with at least one victory.

"State is always a great experience. It's hard to prepare for if you haven't been before," coach Steve Sacry said. "I was pleased that everyone scored a win in their respective weight classes."

The Trojans were led by Sophomore Connor Johnson who placed for the second consecutive year, finishing fifth at 126 pounds.

"I was extremely proud of the effort and work put in this year by the team....