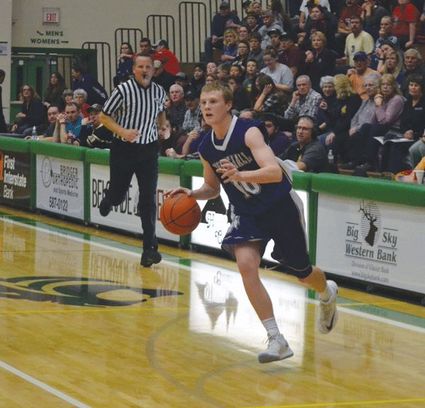 Sophomore Max Feight takes the ball up the court at the 5B District Tournament in Belgrade. Whitehall will open the Southern B Divisional Tournament Thursday night against Roundup.

Tomorrow night the Whitehall High School boys basketball team will return to the court for the first time since a 62-33 5B District Tournament challenge game win over Three Forks. It just so happens it will be their biggest game of the year to date.

Whitehall (16-5) will go into the game against a Roundup defense that gives up under 42 points a game. Trojans head coach Zach McLean said his team always tries to put an emphasis on valuing possessions, but it becomes even more important when facing a defense like the Panthers.

"They are very sound defensively and put a focus on packing the paint. We want to control the tempo in our favor," McLean said.

Roundup won the regular season title in District 4B, but finished second in the conference tournament after losing in the finals to Joliet.

The Trojans victory over Three Forks will be over ten days from the matchup against the Panthers, and McLean said the focus in practice has been on individual development of his team, as well as things Roundup does as a squad.

"We can always get better and that is our focus right now," McLean said.

Several days after the challenge game victory over Three Forks, McLean was happy with how his team responded after the overtime district championship loss against Townsend. The longtime coach said he was not sure how his team would react, but the squad flat out wanted to extend the season.

Taking a quick look back at the District Tournament, McLean said the crowd in the Belgrade Events Center was phenomenal.

He's hoping for more of the same Thursday night.

"Would love to see that in Billings, and it sure means a lot to us!," he said.