By Abe Winter
For the Ledger 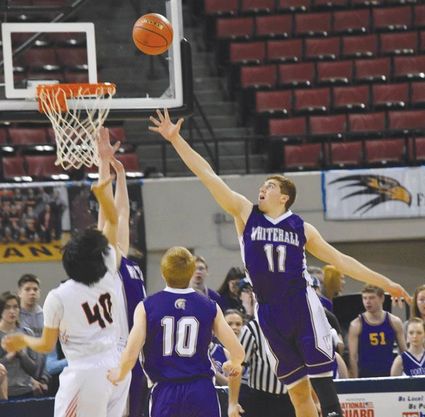 Andrew Simon (11) get off the shot against Lodge Grass at the Class B State Tournament.

Billings -- Not playing your best at the state tournament, at least in the opening round, proved to be a downer for the Whitehall High School boys basketball team.

But after falling 69-55 to eventual runner-up Anaconda on Thursday in the second game of the 2017 Class B tourney at Rimrock Auto Arena, the Trojans bounced back with two victories -- 71-56 over Lodge Grass on Friday and 64-62 over Missoula Loyola on Saturday morning -- before losing 52-42 to Shelby in the third-place game Saturday afternoon.

The loss to Anaconda was disheartening. The Copperheads scored the first six points a...