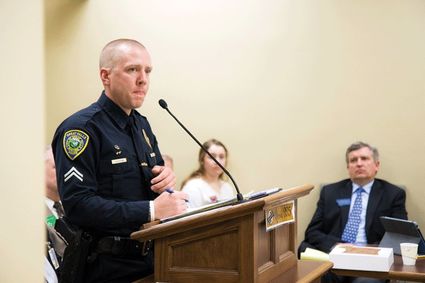 Clint Houston, an officer with the Great Falls Police Department, says his department has recovered more than 10 ounces of heroin in the last two months. Houston testified on Monday, March 20 on House Bill 333. Houston said the department was ready to get overdose medication, but realized they had no legislative backing to do so.

Liz Schwartz's brother overdosed in their parents' garage after sucking prescription opioids out of a used fentanyl patch. His mother found him on the floor and immediately called an ambulance. He made it to the hospital in time and survived.

But within a year, Schwartz's father overdosed the same way. He, too, survived.

"You think the addict is getting clean, or they're on the right track to getting there, and there's setbacks like that," Schwartz said. "It's terrifying."

While Montana's drug of choice for decades has been methamphetamine, the use of heroin and opioids like fentanyl and o...