Jane passed away surrounded by her family on March 31, 2017 in Whitehall, Montana. Jane was born in Spokane, Washington on September 5, 1926 to Leta Richardson Norman and Russell Norman. The family began in Laclede and Sandpoint, Idaho where they then moved to Orcas Island, Washington where Jane ate so many strawberries that she got sick and from then on always said she was allergic to them. At the age of 4 her father working as a lumberjack was killed in a lumber accident. The family of 3 now moved back to Spokane where Leta went to beauty school and in 1936 they moved back to Whitehall.

Jane graduated from Whitehall High School and attended McCarroll Beauty School in Butte. After finishing she worked in her Mother's beauty shops in Bozeman and Whitehall. Being longtime friends of Bud's sister, Betty, she was able to meet Bud Kountz on May 8, 1945 (V-E day Germany surrendered) at the Cactus Inn for their first date. They were married on November 20, 1947 and moved to the Pipestone ranch where they raised their 2 children until 1967 when they moved to Whitehall. While on the ranch, Jane was the "cook and bottle washer" and was a member of Cowbells during this time. She enjoyed her bowling league, and traveling to tournaments with all her friends. She was proud of all her work for 40+ years with the Country store and all her friends there. She enjoyed many years of playing Shanghai with many different friends. Holiday dinners always included playing Shanghai with most of the family and Jane was referred to as the Shanghai Master so there was no cheating while she was playing.

She was preceded in death by Bud on September 25, 1971; her parents Russell Norman and Leta Norman Hall and her step father George Hall, and brother Bob Norman. Also her mother and father-in-law Louis & Elizabeth Kountz, sister-in-law Betty Kountz Hennessy. 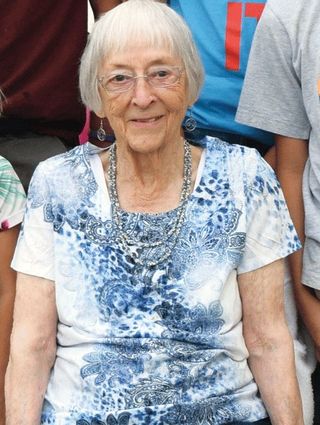 Memorials can be made to the Whitehall Museum.

Mass of Christian Burial will be held at St. Teresa's Catholic Church in Whitehall on Friday, April 7, at 11:00 AM with a luncheon following the burial at the Whitehall Cemetery.

K&L Mortuaries & Crematory of Whitehall is assisting with arrangements.