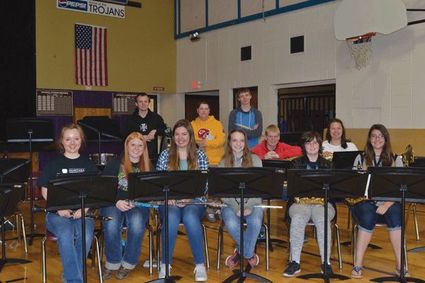 Pictured are members of the Whitehall High School band who will be traveling to the District Music Festival in Deer Lodge.

Students at Whitehall High School have been busy preparing for this week's MHSA District Music Festival.

A total of nine choir members and 16 band members will perform at the festival April 20 and 21 in Deer Lodge.

High School Musical Director Janet Heilig said she starts thinking about the festival on the first day of school, and the students starting working on their performances in January.

She said the competitors who receive a superior or the highest score will advance to the State Musical Festival.

The members of the choir attending the festival are Iris Heimberg, Bailee Hess, Rabeca...