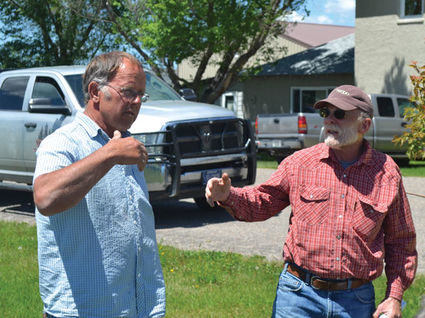 Chris Wagner (left) and Tikker Jones discuss the future of the Cardwell Dump at a meeting last week.

Concerns about the dump in Cardwell were addressed last Thursday at a regular meeting of the Madison County Solid Waste and Recycling Board.

Chris Wagner was one of the handful of residents at the meeting, and he expressed concerns about not only the appearance of the dump, but also illegal dumping.

Wagner also addressed concerns with trash containers overflowing and said he has seen residents from Jefferson and Silver Bow counties...