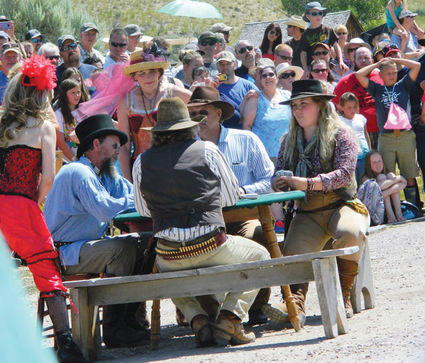 A card game led to a vicious gun fight in front of Skinner's Saloon at the recent 2017 Bannack Days celebration.

Judge Alan Williams slammed down his gavel and admonished the prisoner to "Stay out of trouble in this town!" The prisoner had been arrested on Bannack's Main Street when he was recognized as a claim jumper. The Judge had several options – whipping – hanging – or, perhaps, the remittance of a gold piece. Finally the wife agreed and turned over the gold coin and the man went free and the court was dismissed.

Since 1976, the registered historic landmark known as Bannack, has celebrated its 'wild west' history during Bannack Days. This was the site of the first major gold discovery in Montana in 1862. Bannack became the capital of Montana Territory for a brief period in 1864. This State Park was established in 1954; the last summer cabin was purchased in 1984 and in 1986 the area officially began its story. Although Bannack is open year round to history lovers and ghost story enthusiasts for two days in July the town comes alive.

Reenactors wander the street, court is held, the guilty are hung and shoot outs settle the score. In addition, there is entertainment, demonstrations (Bobbin Lacers, Butte Magic Show, Quilting and more) and food. There were horse rides and city council meetings and debates on every corner and in every building. To tide one over, iced coffee or cookies or hamburger or hotdogs or Indian Tacos and much more were available

Everyone has a story to tell. Jaye Christensen, a pianist, has entertained for 39 years. At first this musician played an 1886 pump organ and currently plays a piano donated by Peter Fonda with the message "Good Vibes." This talented musician who writes much of the music played laughingly shared a story of one song in which yodeling was incorporated.

A visitor approached and complimented the singer on using Hawaiian in the lyrics. When she was advised that it wasn't Hawaiian – but yodeling – she said "Well, it certainly was a 'wacky key.' This talented musician then sang "Has Anybody Seen my Gal" as Jimmy Durante did. 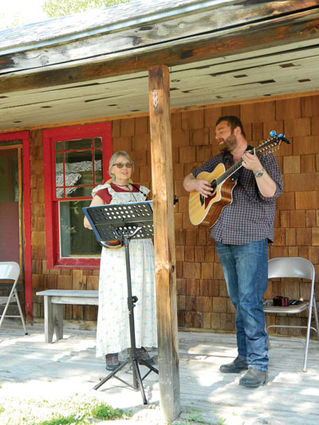 Donna Weldon and Dan Rosasco from Whitehall entertain at the 2017 Bannack Days.

Speaking of a small world.....ran into Donna Weldon and Dan Rosasco of Whitehall entertaining the celebrants with their mandolin, guitar and vocals and some old time tunes such as "This Train Don't Carry No Gamblers" to "The Little Brown Church in the Vale."

Abigail Deffenbaugh of Dillon, a candle maker volunteer for four years, reflected the general mood of all the volunteers when she said the reason she volunteers is because "she likes all the people and the old music and the food."

If you feel you cannot walk the street to see all there is to see and enjoy, there are shuttle vans available that you can hop on anywhere along the way.

These are very handy when you take a short cut to the parking lot and find yourself twice as far away as when you started!

Did I mention the ghosts that are said to live in the buildings and wander the street?