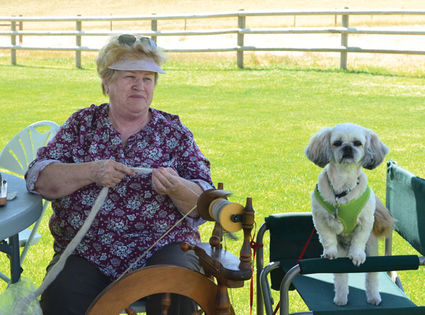 Roseanne Anderson and her faithful friend Anya spend an afternoon at the Copper K Fiber Fest.

The sun had just begun its orb illuminating 'Nature's Tapestry.' From the muted blue of the mountains, to the yellow, gold and green of the rolling fields, to the variegated greens of the trees, to a silver accent of the irrigation lines to a shining blue thread winding through the picture which was capped by the clear blue of the sky above only dotted with the back silhouettes of a gaggle of Canadian Snow Geese on their flight, this magnificent Montana tapestry surrounded the seeker as they sped to the Copper K Barn for the 2017 Fiber Fest presented by Kami Noyes of Ranching Tradition Fiber and Betty Kujawa of Snowdrift Alpacas.

As one walked through the tents of the vendors on the lawn outside overlooking the Jefferson River on its winding journey and entered the doors of the barn the seeker was greeted with a burst of brilliant color and by whispers of 'addiction.' These 'addicts' had gathered together from Utah, Canada, Washington, Connecticut, Ohio, Wyoming, Idaho and all points East, West, North and South in Montana.

As event co-sponsor Kami Noyes explained she had been actively involved in raising Targhee and Rambouillet Sheep, became interested in spinning, which her relatives encouraged, and soon became addicted. Betty Kujawa, the other co-sponsor, eagerly backed up Kami. She began to raise her own Lamas and Alpacas (Ashford Kiwis from New Zealand) on a hill overlooking Butte and soon her business Snowdrift Alpacas took form. She is often joined by her husband Mike as he displays his pottery from his Copper Creek Studio.

Goldiknots of Laurel, Montana, was formed when Tammy Jordan began to raise her own sheep – Romney and Cormo – fell in

love with them and the addiction grew and grew until her business was begun – Fleece to Fashion – is her motto.

Peggy Doney from Colorado Springs, Colorado, explained that she began to dye her own wool in variegated colors made from acid dyes, kept a recipe book of the colors formed and created a "Petting Zoo" as she felt that the colored yarn should be felt and

loved. Her hobby and addiction soon became a business "The 100th Sheep." 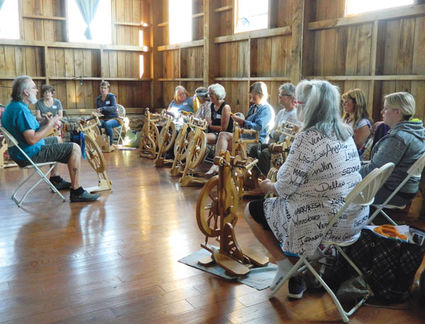 Randy Glick leads a spinning class at the 2017 Fiber Fest.

This addiction is local also. "The Locals," a Fiber Arts Club in Whitehall, meets weekly on Mondays at the Senior Center. Not only do they work on traditional crotchet and knitted pieces, but they make felt dryer balls (which replace the dryer sheets) and draw pictures on wool pieces (called needle felting) as Barbara Peters demonstrated or made jewelry from the cocoons of Silk Worms as explained by Julie Eakin. This club welcomes all – young and not so young – who have a passion for working with fibers.

In addition to the many vendors and artisans present, numerous classes were taught from dyeing to weaving to spinning. And if that wasn't enough, the 'addicts' from the Bozeman Weavers Guild are planning to host the 2018 MAWS (Montana Assoc. of Weavers and Spinners) Bi-Annual Conference in Big Sky.