ERs emerge as the frontline in the meth war 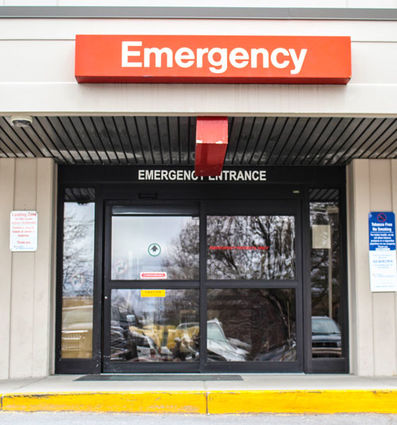 Emergency Rooms see their fare share of patients under the influence of meth.

But about once a week he treats patients coming into the emergency room because they're psychotic from taking too much methamphetamine.

These patients are terrified. Their hearts are beating fast. Usually they're hallucinating.

When they come into the ER security guards meet them at the door. Six or seven people strap them to a hospital bed and a doctor injects them with a tranquilizer.

At St. Pat's most of the rooms are filled with medical equipment: monitors on the walls, gauze on the shelves and needles to start an IV. But they have one room set aside for these patients. The walls are bare. There's a hospital bed in the center of the room.

"A lot times we'll even take the bed out of there and just leave the mattress on the floor," Melzer said. "They can literally pick up these 100 pound beds and throw them against the wall."

Normally a security camera monitors the patient from above, but someone had recently ripped it out of the ceiling. There's a discolored patch of drywall showing where a patient had punched through the wall. Scratch marks covered the room's plexiglass window.

As Melzer was explaining how he handles these kinds of cases, another doctor knocked on the door and said that a psychotic patient had just come into the ER because of meth.

Typically we think about meth as a long-term problem that requires months or even years of treatment. But according to data from the national Substance Abuse and Mental Health Services Administration, 93 percent of Montanans with substance abuse disorders don't get treatment.

When these people are in crisis and need help, a lot of times they end up in the ER.

"We're adding up to three, four maybe five patients a day," Melzer said. "If you have two or three people who are coming in here who are meth toxic and requiring all of our security guards, multiple nurses and then an hour of time from the doctor trying to control this person. Yes, they're a very important patient, but there are also very important patients in the waiting room."

In addition to time, these cases also take a lot of money. According to data from the Montana Hospital and Emergency Discharge System, between 2010 and 2014 a visit to the ER related to drug use costs on average about $1,800. In comparison, getting care at a standard drug rehab center usually costs $500 to $600 dollars a day. But the cost of both ER visits and rehab can vary dramatically depending on the situation.

Treatment centers don't provide the same type of care as an ER, and many of these patients may need to go to the emergency room. The doctors in the ER are the right people to help with the immediate problem of psychosis, but they can't do much to deal with the underlying addiction.

But tracking how often Montana's ERs act as front-line centers for the state's meth problem is tough. It's up to individual doctors to decide how to report a patient's' diagnosis. And that's not always clear-cut. Melzer says there's 20 or 30 different codes he could use to describe a patient who comes into the ER because of meth.

The Montana Department of Public Health and Human Services reports that between 2010 and 2014, doctors in emergency rooms across Montana only reported 100 cases of meth poisoning. But doctors said that in no way reflects what they're facing every day - in cities like Missoula, which has two ERs - and in places where there are fewer options.

Tim Thornton is a physician's assistant in the ER at St. Joseph's Medical Center in Polson, which has four beds.

"I was giving a little presentation three to six months ago, I can't remember exactly when it was, but I remember saying in my presentation kind of tongue in cheek that we see somebody with effects of methamphetamine every shift," Thornton said. "And I kind of felt bad because I wasn't sure if I was just BSing, so I started paying attention to that. And lo and behold that was not an incorrect statement."

Hospital staff in Hardin and Anaconda report plenty of meth users in their emergency rooms as well. Thornton suspected that meth hits hospitals in rural towns even harder than urban areas. And usually these hospitals have fewer resources to deal with the problem.

"I can't justify keeping someone in one of my four beds for hours and hours and hours until they sober up," Thornton said. "So now you're adding the expense of an admission to the hospital."

Part of the problem is that drug users in Montana don't have access to treatment. The Montana Office of Rural Health surveys communities around rural hospitals. Since 2012 the survey has consistently identified substance abuse as the top health concern for rural communities. But until this year, Montana only allowed one treatment center per county that can bill for Medicaid or state block grants to help uninsured people pay, so there are long wait lists.

"The state has a significant shortage of treatment," Aaron Wernham, the CEO of the Montana Healthcare Foundation, said. "And that's why people end up in the ERs."

Earlier this year, the Wernham's organization announced a special focus on substance abuse. The foundation plans to fund projects that expand the availability of treatment in the state. It also hopes to fund projects that help primary care doctors identify substance abuse issues early on, which could help patients get the treatment they need before they land in the emergency room with more acute symptoms.

Help may be on the way. A law that took effect July 1 could make it easier to open new treatment options. It lifts the cap for state-approved facilities in each county. In addition, the Montana Healthcare Foundation is working with the attorney general on AID Montana, an initiative announced in April with a goal to streamline how the state deals with its growing substance abuse problems.

The state's effort might end up reducing the number of drug users in the ER at St. Pat's. But until then Dr. Doug Melzer will still be one of the only options for meth users who need help now.

"Friends and family wish there was some way that we could detain people," Melzer said. "But that is just not a reality. We don't have the funding for that kind of detox center."

He has a "come to Jesus" talk with his patients when they leave the ER. He tells them where to seek help. But he's not sure how effective it is.

"Scattered throughout the state there are several different detox programs that we refer people to and we hope that they will take those resources to heart," Melzer said. "But unfortunately it's lacking. And anyone who deals with meth, or even alcoholism, will tell you that there just needs to be a little bit more help."