For the past two seasons, Whitehall's Max Feight was able to watch and learn from all-state quarterback and 2017 graduate Braden Larsen.

It is now time for the rising junior Feight to shine.

Feight praised Larsen for his leadership and teaching him about playing quarterback in a complex Whitehall system. It was during this time, Feight was able to learn everything from the basics of the position, all the way to going through progressions at the line of scrimmage. 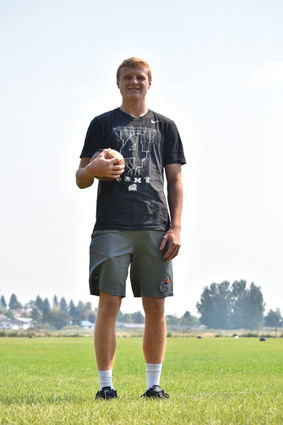 "I think the relationship between him and Braden really helped him to take the next step in his process of becoming the starting quarterback. He's such a competitor and is very coachable which makes my job pretty easy," head coach Dan Lacey said.

The new gunslinger will also bring his own style of play to the quarterback position. Feight said he does not like to run as much as his predecessor, and instead will spend more time in the pocket.

Having watching the progress of Feight for two seasons, Lacey is impressed with his growth and his tools to play the position.

"Max is a tremendous athlete who is extremely smart. Max brings a lot to the table at the quarterback position. One thing that really stands out to me is how well Max throws the ball on the run," head coach Dan Lacey said.