There will be a new assistant coach on the sidelines for the 2017 Whitehall/Harrison High School football team.

Brennan Hayes was hired over the summer to join the staff that includes head coach Dan Lacey and assistant Ed Simon.

In an interview last week, Hayes who is a third grade teacher at Whitehall Elementary, said it was a honor to be hired for the position.

Hayes said he knows he will stepping into a program that has seen a great deal of recent success, but he also sees a group of hungry players.

"They are a great group of kids," Hayes said. 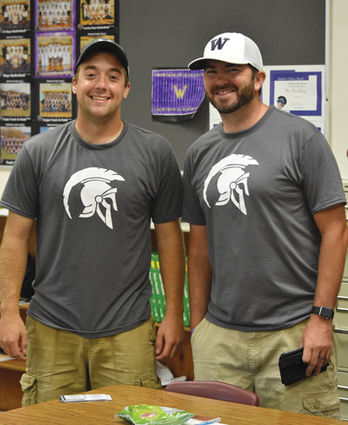 The new coach will step into the new position running and will take over as defensive coordinator. One day after the team completed their three-a-day fall practices, Lacey praised his new assistant.

"Coach Hayes has done a tremendous job of picking up both the defense and offensive schemes we are running. He is a high energy guy that demands a lot and expects even more which fits right into our philosophy very well," Lacey said. "He will call our defense this year and I'm excited to have him on our staff and look forward to watching him grow throughout the season as a defensive coordinator."

Hayes said the defense will run a 4-4 base and he wants to get a lot of pressure on the oppositions quarterback.