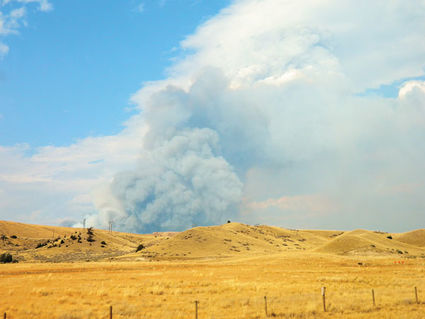 As of Wednesday morning at 11 a .m., the Conrow Fire was reported at 2,727 acres and the containment was at 65 percent. The estimated containment date is Wednesday, September 6. United States Forest Service District Ranger Dave Sabo said on Tuesday there has not been a size increase for the fire in two days.

The fire started on private land in Jefferson County within the Whitehall Fire District and has burned onto lands administered by the BLM and USFS. The USFS, in coordination with Jefferson County, Montana Department of Natural Resources and Conservation, and BLM has taken the administrative lead on the wildfire.

A total of 16 structures are threatened by the fire. The total number of personnel on the incident is 160, with resources assigned compromising of four crews (two hot shot), one helicopter, four engines, three dozers and six water tenders. Two Air National Guard Helicopters have also been assigned to the fire with water-bucket drop capabilities.

Public meetings to give residents information about the fire took place Tuesday afternoon at 108 Antelope Lane near Whitehall, and Sunday, Aug. 27 at the Whitehall Community Center.

Lisa Kemper, Incident Command Trainee, said at the meeting good progress has been made on the fire, and praised local firefighters for their initial responses. With resources stretched thin across Montana and the Pacific Northwest, Kemper said officials had to call in a little help for the Conrow Fire.

Also with the Nevada Team, Incident Commander Aaron Boyd said they feel optimistic about their progress with the fire, but did air caution about concerns with high temperatures and low humidity.

Sabo said after the fire Whitehall Volunteer Fire Department Chief Jeremy Ward and his crew got right on the fire and did the best job they could.

"We've been making good progress, but were not out of the woods," Sabo said.

While there are no evacuations at this point, Jefferson County Sheriff Craig Doolittle encouraged residents near the fire to pickup an evacuation packet that was provided at the meeting.

Doolittle also warned residents about of possible delays on Highway 69 because of helicopters, and discouraged residents from parking on the side of the road to look at the fire. 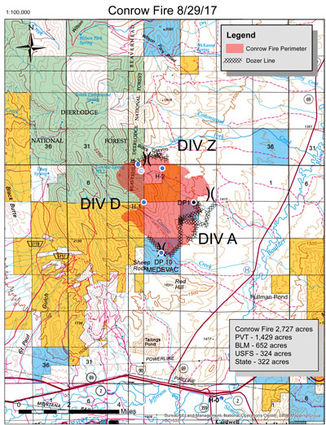 Kemper said firefighter and public safety is the first priority of the full suppression fire. She said values at risk include electronic sites, mining sites, residences and cattle ranch operations along with Highway 69 corridor.

The team made good progress Monday as another large segment of containment was added along both hand and dozer containment lines. Retardant planes were used Monday to check fire spread on the northwest flank. Helicopters were also used to support ground based-efforts with water-bucket drops to lessen heat on all flanks. Monday efforts also included structure assessments on Antelope Lane.

On Tuesday, officials were considering burnout operations on the west flank to reinforce containment lines.