There were plenty of positives for the Whitehall High School volleyball last Saturday in Manhattan.

The Lady Trojans were not only able to pick up a victory against Livingston, the young team was also able to gain valuable experience on the court.

Head Coach Lauren McDonald said the team has 14 girls out for the team, but only 12 had enough practices so they were not able to sub for their varsity or junior varsity teams. She said it was daunting when they first arrived to see teams with around 20 players, but the girls did a nice job of settling in and working out kinks.

McDonald told her team they may be a short team, but they will be the best short team. 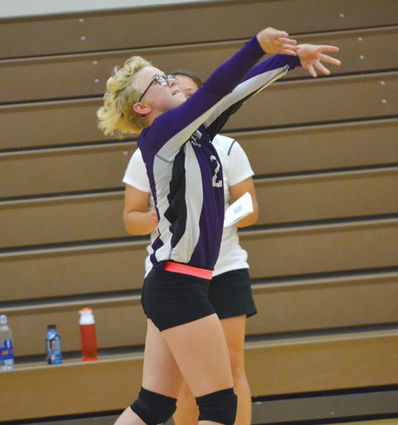 Whitehall's Hannah Bieber puts the ball over the net at a scrimmage earlier this month. The Lady Trojans will host Broadwater Thursday.

In their first game against Jefferson, McDonald said the team started slow, but turned around and played really good in the win against Livingston. She was also pleased with the way the team followed the victory up in a tight loss the following match against Manhattan.

McDonald praised the play of freshman Kendra Klapan, who she said did really good with her net game and passing. Overall, she said the team did some really good things at the tournament.

The Lady Trojans will open their home season Thursday, August 31 when they host Broadwater with the junior varsity scheduled for 4 p.m. Varsity will follow.

McDonald said it is super nice to have the game at home Thursday, especially since it is the second day of school.