On Labor Day, the small historic mining town of Mammoth rolled out its own brand of a "Rocky Mountain High" Music Festival. Nestled in the Tobacco Root Mountains, this year's festival was conceived and hosted by local residents, Dave and Marjorie Klem. The 3 hour music extravaganza touted a line-up that featured a diverse genre of music from mostly local talent.

The Klem Brothers, Dave and Marjorie's Grandsons, kicked off the Festival with Carson Klem on Cello and Winston Klem on Viola. After the duet played several classical waltzes, Marci Flowers, a Klem guest from Sacramento accompanied the Klems on Keyboard as they beautifully performed a rendition of "Hallelujah" by Leonard Cohen. Most people would recognize the song, Hallelujah, from the popular movie, Shrek.

Next the Grinder Sisters from Cardwell, Anna, Natalia, Lauren and Emily sang a very nostalgic World War II song in a cappella from The Andrews Sisters, "Boogie Woogie Bugle Boy of Company B". Later they were joined on stage by William and Julie, their parents.

Jason Reese, another talented grandson of Dave and Marjorie, sang and played several contemporary Christian songs on guitar. The accomplished pianist Marci Flowers complemented Jason on Keyboard and with vocals. 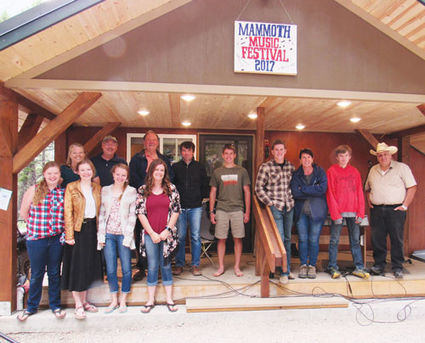 After an intermission, Terry Murphy had the crowd tapping their toes with Hank Williams Sr., Sons of the Pioneers, and other classic Western tunes to include a couple of his original compositions. Ron Jung came up on stage and performed several John Denver songs as he was backed up by Terry Murphy and David Parker. Denver's Country Road had everyone in the audience joining in. Going solo, Ron demonstrated his talent as he played the Dobro and then sang a cappella.

The grand finale was David Parker on guitar. He was so-o-o good! David just laid everyone out with his ability to capture the haunting essence of Bruce Springsteen's, 1982 song, State Trooper. David then played an original composition with Carson Klem on Cello. The awesome instrumental was inspired by a spectacular Montana summer thunderstorm David experienced years ago. After hammering out several other rock favorites, the Grinder Sisters joined David on stage for a closing jam session.