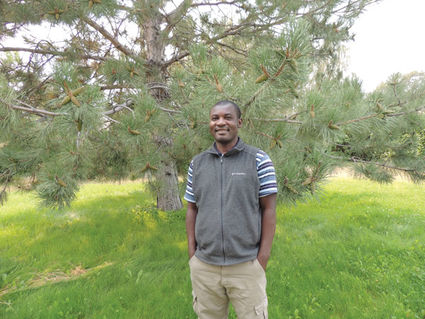 Father Elias happily states, "I actually am titled a Parochial Vicar." What that means is that Father Elias has been loaned to the Catholic Diocese of Helena from the Archdiocese of Kaduna, Nigeria, Africa, and the Diocese sees fit to have a local priest as the pastor. Father Thomas Haffey, who is also pastor at Saint Ann's in Butte, is the pastor. In charge in Whitehall is Father Elias.

As a matter of fact, Father Elias celebrated the anniversary of his ordination last Friday, when Saint Teresa's Knights of Columbus put on a barbecue in his honor. September 3 is Father's eighth anniversary. Last Monday, I sat down with Father to prepare a talk for the Knights.

Father felt his first calling around the age of fifteen. Attending mass was always special to him. His local priest shared his father's name, Stephen, and young Elias came to see him in a special light. He thought it must be wonderful to minister to people and their faith. Right after high school father joined the first of three seminaries. With sixty-three other seminarians in the year 2000, Father embarked on a one year program designed to firm up the minds and hearts of young men with many doubts. The next year for philosophy studies he joined a much bigger class at Saint Thomas Aquinas Seminary. Both of these colleges were a blur of activity and study for Father.

Priests from Father's home area serve more than the city of Kaduna, which itself contains roughly 6.3 million people. The Archdiocese of Kaduna for example has about 140 priests. Important to Archdiocese is teaching priests to care for the sick and dying. So, next Father served his One Year Pastoral at Saint Gerard Hospital.

"I was impressed with human suffering and how varied are the responses people exhibit. Some show bitterness, while others still remain hopeful and show a happy side." The next four years Father attended Good Shepard Major Seminary, and was ordained a priest, September 3, 2009

For Montanans, a telling factor of cultural difference are the many ethnic groups that comprise Nigeria, which with a land mass of 350,000 square miles, comprises an area of about two and one half times the size of Montana. Yet, Nigeria itself has a population of about 180,000,000. There are 250 languages spoken in Nigeria, possibly more than 400. Father comes from the tribe of Bajju. Also, Muslims comprise at least half of the population of Nigeria. Father Elias's point of view is broad therefore, and defers his wishes to the wishes of others.

"In Butte, very friendly, everybody knows everybody." Last year, upon joining the Catholic Diocese of Western Montana, father remembers a busy year in Butte. "Usually on weekends I served Mass four times. I served all six of the churches; I assisted at Montana Tech (college), and was Assistant Chaplain at St. James Hospital. Laughing, Father continued, "The Diocese must have thought that I would get homesick because they kept me busy." 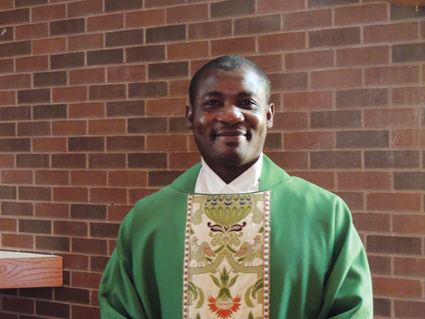 "We pronounce it, 'E.' In English it is written, 'I.' It means YES." Father's approach to serving at Saint Teresa's is positive. He particularly sees a need to serve youth. "I tell adults that it is 'oppression' not to take care of youth. Engage them in the activities of the church. The Catholic faith was handed over to us by our fore parents....by our parents. Hope and courage are handed down to the next generation. We accept from our parents a sense of right and wrong, conscience and obedience. We are all creative....When we leave the surface of earth, we take back to God what we've created here on earth."

Father Elias looks forward to getting to know his parishioners in the year to come, and, on his days off, he looks forward to traveling throughout Montana to see Yellowstone and the vast and beautiful wilderness that comprises this Rocky Mountain region.