It was another successful year for the Whitehall Annual Softball Tournament.

The event that took place in late August was able to give back to the Whitehall Food Pantry.

Organizer Mikel Kelley said that heavy smoke led to the cancellation of several teams, but she had five die-hard teams that participated.

Kelley said each year she gives participants an option of where donations will go locally, and in 2017 they selected the local pantry.

Sacry said it is so important to get donations from the public.

"We really rely on the donations of people like Mikel," she said. 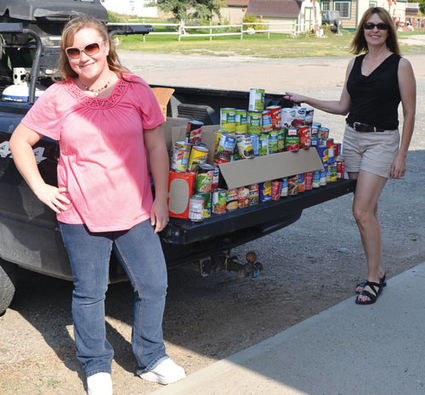 The tournament also served as a fundraiser for a playground at the local softball fields. Kelley said they are still working with the local rec board on the the playground, but they have already raised $739. She added the local TIFF District would provide the turf and a fence, and the money raised will pay for the equipment. Kelley is hopeful to raise $1,000 and for work to start on the playground in October.

Kelley said it is important for Whitehall to have a playground at the fields like other area towns so kids can have something to do while their siblings or parents are playing.

The "Pitches Be Crazy" team of Butte went undefeated and finished first at the tournament. The "Royal Bunts" team, also from Butte, placed second. The Master Batters team placed third, and the Tannen Ranch team of Bozeman was awarded the Dog House Trophy.

For information about donating for the playground, contact Kelley at 490-8891.