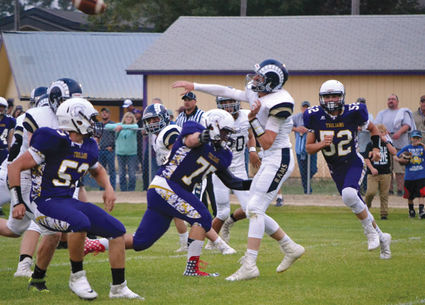 Eli Reynolds (75) closes in on the quarterback Friday night against Red Lodge.

After two dominating wins to open the season, it was more of the same for the Whitehall/Harrison High School football in their conference opener Friday night at Trojans Field. Whitehall used a well-balanced offense and smothering defense to improve to 3-0 on the season with a 41-7 win over visiting Red Lodge.

“They are doing a great job. We are getting a rotation in the on the defensive front and you can see that later in the game when teams are getting a little wore out. We are able to sub in some guys and got our pass rush coming back in the late third and early fourth quarter. We haven’t had a lot of depth in the past on the defensive line, so that is something we are excited about,” Lacey said.

Due to injuries to key players Lane Buus and Connor Johnson, the Trojans went into the game with two new starters. Freshman Tegan Robbins started at the “H” position on offense, and junior Clint Parks started at outside linebacker. Lacey said both of the positions are key for the team, and he was very pleased with their performances Friday night.

“I’m super proud of those two to step in and we did not miss a beat,” he said.

For the third straight week, Whitehall opened the game strong and scored on their first possession of the game when Max Feight connected with Braden Smith for a 15-yard touchdown with 9:32 left in the quarter.

The Trojans would score one more time in the first when Feight connected with junior playmaker Wyatt Alexander for a 23-yard touchdown. The score came three plays after Alexander ended a Rams drive with an interception.

Alexander continued to shine early in the second when he scored on the second play of the quarter on a 14-yard pass from Feight. The ensuing point after touchdown from Brandon Gipson would put Whitehall up 21-0 with 11:43 left in the first half.

Red Lodge would score their only only points of the game with on the next possession when they found the end zone on a hook and ladder play with 7:52 left in the second quarter.

Whitehall would put the game out of reach early in the third when Feight once again connected with Alexander, this time a 12-yard reception with 8:46 left in the quarter.

Lacey said Wyatt had an amazing game on both sides of the football.

“He had 15 receptions for over 250 yards and three touchdowns on offense which doesn't happen very often. It wouldn't surprise me if the 15 receptions is a record for Whitehall. Defensively they test him very minimally, and he still found a way to get an interception,” Lacey said. “What I like most about Wyatt is his leadership that he brings on and off the field. He's the type of kid that lets his play on the field speak for itself. I'm extremely lucky to be able to coach such a gifted athlete on both sides of the football and this summer he worked so hard to get to where he's at and I'm super proud of him for that. There's no doubt in my mind that we will be watching him play on Saturdays.”

The Rams put together an impressive offensive drive late the third, but Feight stepped up huge for the Trojans with a leaping interception with 20 seconds remaining in the quarter.

Lacey said it is huge for Feight, who had several key runs in the second half, to be able to get yards running because it opens so much for the passing game. 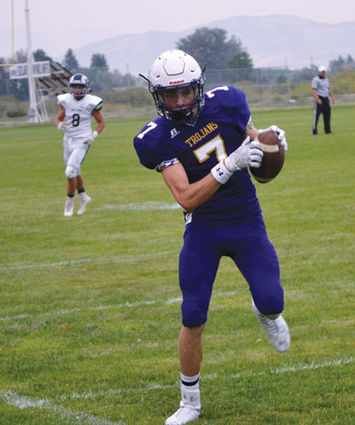 “It’s an addition for our running game and something we look for. If they are going to put so many guys in coverage, were going to have a lot of open windows to run and in the second half he did a good job of that,” Lacey said.

Whitehall will once again be at home next week when they host Big Timber. The Herders come into the game at 1-2 following a tough 24-22 home loss Friday night to Manhattan.

Lacey said it has been really good for his team for the younger players to get a lot of reps in the first three games.

“We have five or six guys that this was there third varsity football game and were still doing some pretty amazing things,” he said.

Looking to the game September 15, Lacey said after quite a few penalties against the Rams there are some things to clean up with alignments and assignments, but he likes the way the team has been playing.

The game is scheduled to kickoff at 7 p.m. at Trojans field.