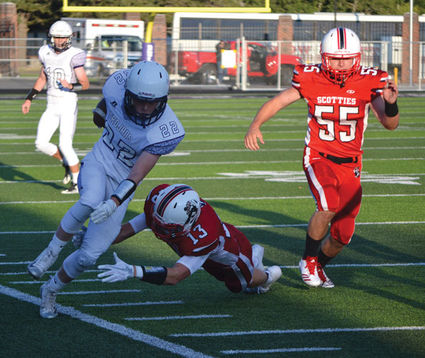 Cade Briggs gets forced out of bounds after a huge run against Glasgow.

In their first two games of the season, the Whitehall/Harrison High School football team has scored a whopping 72 points in the first half. They have given up six in the opening frame, and just 12 overall. The Trojans excelled in all three phases of the game Friday, September 1 at Naranche Stadium in Butte on their way to a 54-0 win over Glasgow.

Shortly after the game, head coach Dan Lacey said this is the first time since he has been a head coach that the team has won the battle on offense, defense, and special teams.

"We didn't just win, we dominated every phase and we played as 11 every time we went onto the field," he said.

After both teams failed to score on their opening possession, Whitehall would score their first of four first-quarter touchdowns on a seven yard Max Feight pass to Braden Smith. A successful point after touchdown by Brandon Gipson put the Trojans up 7-0 with 8:13 left in the quarter.

Whitehall would bounce back from a Feight intercepwhen Cade Briggs picked off a pass and ran it back five-yards for a touchdown with 7:35 remaining in the quarter.

Briggs would score again in the first quarter on a 26-yard touchdown pass from Feight. Lacey said Briggs is a great player on both sides of the ball and those are the type of plays they expect from the junior standout.

The Trojans would take a 28-0 lead into the second quarter, and would score quickly into the second when offensive linemen Eli Reynolds recovered a fumble in the end zone for a touchdown with 11:06 left in the half.

The Trojans would score their final touchdown of the game when Feight took it 22-yards for a touchdown with 9:08 left in the third.

In the fourth quarter, Trojan freshman Tegan Robbins would pick up the first varsity interception of his career. Lacey said when the younger players came into the game the team did not miss a beat and every coach and player came to congratulate Robbins after the interception.

"We are a tight knit group and we like to see success," he said.

Senior Kayden Howser and junior Sawyer Keener both stressed the importance of getting an early start. They both also praised their defensive teammates for the strong start to the season. Sawyer Keener knocks the ball loose in the first quarter. Whitehall will host their season opener Friday against Red Lodge.

Despite the lopsided victory, there was some concern for Whitehall when junior playmaker Connor Johnson went down with a thumb and leg injury. Lacey said Friday he wasn't sure the extent of the injuries, but he was worried and nervous for Johnson.

The Trojans (2-0) will open their conference season Friday, September 8 when they host Red Lodge. It will be the first game played with new bleachers at the football field.

Lacey said the offense still needs to work with a few things like alignment and not forcing the ball in the passing game, but he is very pleased with the two-non conference wins.

Howser was happy, but still hungry.

"We're working as a team and a group, and we've got to keep working," Howser said.