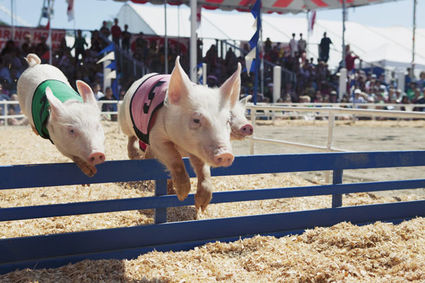 The Whitehall Booster Club "Kiss the Pig" contest is underway.

The Whitehall High School Booster Club has long been an integral part of the community, raising money for the betterment of Trojan athletics. This year, the club has decided to have a little fundraising with the "Kiss the Pig" contest taking place after the Homecoming game October 6 against Jefferson.

According to club member Kami Noyes, residents can donate $1 per bet to select one of four contestants. The contestant who receives the most donations will kiss a pig at the 50-yard-line. The four to choose from are WHS Principal Hannah Nieskens, Elementary Principal Britt McLean, Trojan Head Basketball Coach Zach McLean and Rocky Mountain Bank Branch President Roy McBride. Noyes said if the club raises over $4,000, all four would have to kiss the pig.

The club would also like to have a "Purple and Gold" decoration contest for businesses during Homecoming Week and will announce the winner during the game. Noyes added the club is always looking for more volunteers. The club meets the first Thursday of the month at Pepper Tree at 7 p.m.