Whitehall defense firing on all cylinders 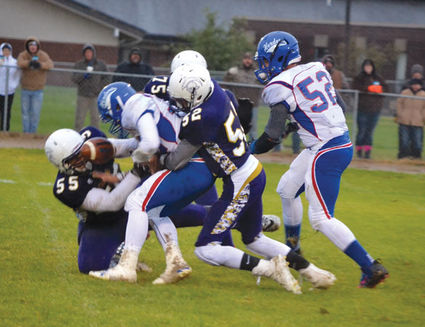 It was a cold, windy, rainy and muddy night September 15 at Trojans Field. While the conditions may not have been ideal for a Whitehall/Harrison offense that had averaged 41 points in their first three games, it was a perfect opportunity for the Trojans defense to once again show they are one of the elite defensive units in Montana. Led by a dominant defensive performance, the Trojans improved to 4-0 on the season with a 22-7 win over a gritty visiting Big Timber team.

Following the game, senior captains Wyatt Alexander and Dawson Hoerauf both praised the play of the Whitehall defense that has allowed just two touchdowns on the season. Alexander said they need to work on special teams where they have given up two kickoff returns for touchdowns, and Hoerauf added they will also need to work on some things offensively, but both were very pleased with the defense on Friday night.

"Our defense in strong," Hoerauf said.

Head Coach Dan Lacey also lauded the defensive performance not only Friday, but throughout the first four games of the season.

"I tell you what, I tip my hat off to the defense. They are doing things right and they are doing what we are teaching them. They are understanding assignments and alignments are a big deal –- and they have run with it. Our pass rush is great, our coverage is great, and the linebackers are stepping up big. I'm so proud of this football team right now," Lacey said.

Whitehall was the first to score, finding the end zone two plays after a Big Timber fumble on fourth down. A three-yard Max Feight touchdown put the Trojans up 6-0 with 3:11 in the opening quarter.

The Trojans would capitalize on another Herder fumble on fourth down in the second quarter, and scored their second touchdown of the game when Eli Reynolds recovered a fumble in the end zone with 8:32 left in the first half. Feight connected with Sawyer Keener for the two-point conversion to push the lead to 14-0.

Big Timber would answer right back, taking the ensuing kickoff for a touchdown to cut the lead to 14-7 with 8:19 left in the second quarter.

Feight was able to stop a Herder drive late in the half with an interception, and Whitehall would take a seven-point lead into the break.

The third quarter was a field position battle, with neither team able to find the scoreboard. This was the type of game Lacey was expecting to see because of the weather.

"We knew this was going to be a tough game and the conditions were not working for our style of play offensively. We knew it was going to come down to our offensive and defensive lines," he said.

It appeared Big Timber had gained momentum early in the fourth when a punt pinned the Trojans deep in their own territory. After a first down run that was stuffed for no gain, Whitehall was faced with a second and ten play from their own two-yard line when magic happened for the Trojans.

Feight was able to connect with Alexander for a 98-yard scoring strike with 7:41 left in the game. 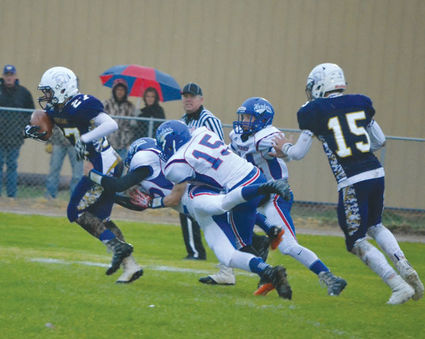 Alexander, who was faced with a double team all night, said he saw the open field and was able to get to the end zone. He credited Braden Smith for a block that helped him get the final score of the game.

"With out him I think I would have got caught," Alexander said.

Lacey said Big Timber did a great job game planning for Whitehall and double covered Alexander like they thought they would.

"I said to the team to stay their course and they would get a big play. Max did a great job of buying some time and Wyatt took it to the house. He's a game changer," Lacey said.

Whitehall (4-0, 2-0 Southern B) will be on the road next week at Three Forks (2-1, 1-1 Southern B). Lacey said his team needs to clean up some things with penalties, but is happy with the first four games of the season.

"They are playing great and I can't wait till next week," he said.