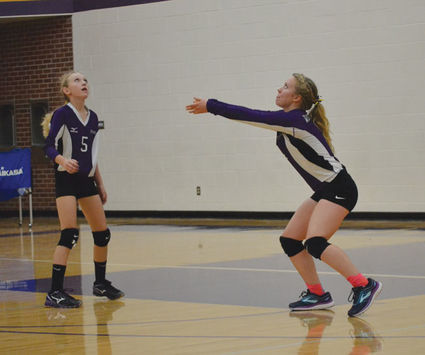 Meagan Johnson and Katie Whitehurst wait for the ball last Saturday against Anaconda.

The Whitehall High School varsity volleyball team will look to pick up their first conference win this weekend against rival Jefferson High School.

The Lady Trojans were on the road Tuesday night in Big Timber. They will host their rival Saturday, September 23, with junior varsity action starting at 5 p.m.

Whitehall fell on the road last night at Big Timber. After losing the first two sets 25-14, Whitehall bounced back and won the third, 25-23. The lost the match after dropping the fourth set, 25-16. Dorothy Mastel had a strong game for the Lady Trojans with 12 kills, seven digs, three blocks and two aces. Hannah Tebay was also huge for Whitehall with 13 assists, 10 digs, and four aces. Morgan Benner had 11 digs, and Kendra Klapan and Kylie Ostler each had eight digs. 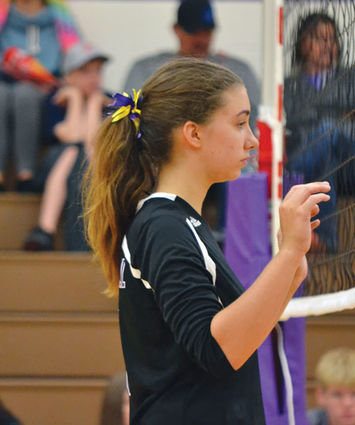 In the opening game against the Copperheads, the Lady Trojans came out strong and won the first set, 25-22. They were defeated after dropping the next three, 25-19, 25-17, and 25-10. Mastel had another big day for Whitehall with 17 digs, eight kills, four blocks, one assist and one ace.