Column: Working from home is not easy when a kitten makes things difficult

One great thing about my job is that I can do it from just about anywhere if need be. While I often times will bring my computer home on the weekend, I've worked at home a few times during the week as well as a couple times while I was visiting family in Wyoming.

Last week, my poor IPhone finally stopped taking a charge and I had to order a new one. I had to sign for it, so I planned it out to stay home on Thursday so I could be there when UPS came to the door. It was one of those things where the phone could arrive anywhere from 8 a.m. to 5 p.m., so I figured I best just be here all day. I've scheduled an appointment with Direct TV where they said they would be to the house sometime between 8 a.m. and 2 p.m. – and found that they usually arrive at either 8:01 or 1:59, so it was best just to stay home for the phone.

I set up my computer in the basement and was going to use Shayla's phone as a hot spot to connect to the Internet. I was a longtime customer with Century Link, but after a huge ordeal with them basically lying to us, we just use hot spots.

There are many dangers with efficiency when working at home with things like sleeping to late, finding a good show on television, or taking a nap, so I was bound an determined to be at the computer by 8 a.m.

I turned on the hotspot and tried to connect to the Internet and it did not work. I did my best at troubleshooting, but I still could not get online. I do probably 50 percent of my work is on the web, so I was frustrated that I could not go through emails or doing anything with the website.

I tried to use the Internet on Shayla's phone, but it also didn't work. I was frustrated so I decided to call Melissa at the Ledger to see if her cell phone wasn't working. I wasn't sure if Verizon had been down or we somehow missed a payment. The call to the office line would not go through.

It was at this point I realized I had outsmarted myself. When school started Melissa and I decided to put restrictions on the kids phones during school hours. I strongly believe this is an amazing way to put a dent in the problems schools have with cell phone usage, but it really put a damper on my workday. I finally realized that Shayla was still able to call her mom and my phones, so I called Melissa and I had her get online and get rid of the restriction for the day.

The Internet popped right up and I was so excited to get a start on a huge list, albeit being an hour later than I wanted.

I went through a list of emails that seemed longer than the Mississippi River when Jerusha -- the sometimes sweet, sometimes evil, and always rambunctious kitten made an appearance. I had a pen next to my note pad to take notes, and within seconds she knocked it on the floor. I put it back and she knocked it down again. This went on for about 20 minutes when I decided to put it in my pocket. I was just about ready to take notes when Jerusha sat on my notebook. I would put her down and the second verse was same as the first. She finally got bored of the notebook and I was able to get my notes down which was a nice start to the day.

I was about ready to start writing a story when she hopped up on the keyboard. Of all the places she could have picked to sit; she chose the only one where she really didn't need to. 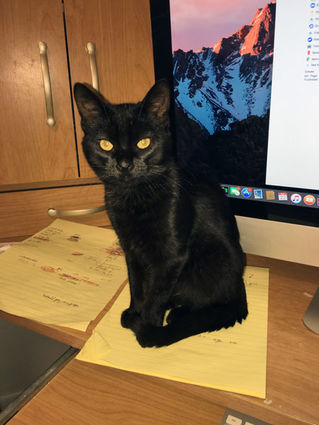 I was so frustrated at this point, but there is only so much you can do with a kitten. They are going to be naughty and there is not much you can do about it. I decided I would get a little feisty too and decided to play some kitten noises on YouTube. Poor Jerusha didn't know what to think. She started running around in circles and making some really strange noises. She than hopped up right on the desk and started watching the videos.

I decided to lock her in a room and this didn't work either. She started whining like a toddler who had his toy taken away.

Finally after about two hours of this nonsense, I was able to start to get some work done.

I thought a nice quite house would be a great way to be efficient, but instead it was a little too boisterous for my liking.

I think next time I stay home to work, I might have Melissa take the cats with her, but than again she would be nothing done.

At least my phone arrived.