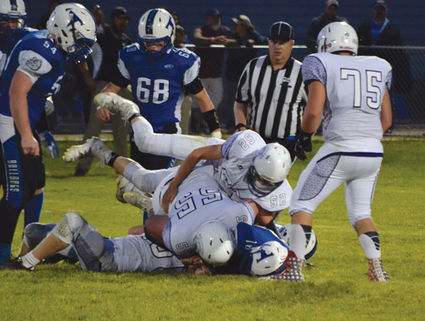 After not giving up a lead in their first five games of the season, the Whitehall/Harrison High School football team found themselves in unfamiliar territory Friday night when Townsend quarterback Tyson Racht connected with Kameron Rauser for a long touchdown to put the Bulldogs up 7-6 with 9:17 left in the first quarter. The Trojans (6-0, 4-0 Southern B) bounced back emphatically with two consecutive first half touchdowns on their way to a 26-14 road victory.

Going into the game, Whitehall Head Coach Dan Lacey knew they would be facing a Townsend team that matched up well with his squad at skills positions and that his squad would face some adversity. He was pleased with how the Trojans responded.

"The biggest thing was being able to weather the storm. Townsend matches up well. We were lucky to score enough points early and our defense was able to step up," Lacey said.

After a Bulldog touchdown midway through the third to cut the Trojans lead to 18-14, Whitehall stepped up with two huge plays in the fourth quarter to propel them to the victory.

Senior Wyatt Alexander ended a Townsend drive with 8:56 left in the game with a leaping interception of Racht. Faced with a third and nine on the ensuring drive, junior quarterback Max Feight connected with senior Lane Buus to seal the game with a 30-yard scoring strike. The two would connect again on the two-point conversion to push the lead to 26-14 with 5:00 remaining.

"That score was huge for us. We knew Lane (Buus) would be open over the middle. They brought the safety over to help with Wyatt (Alexander) and we knew if we had enough time there would be an open look," Lacey said.

Much as been the case all season, Whitehall opened the game in impressive fashion. Alexander picked up his first interception with 10:38 left in the first quarter. The Trojans would score several plays later on a nine-yard pass from Feight to Connor Johnson.

Feight had another huge game for Whitehall. He finished the night 23 of 41 for 310 yards and three touchdowns.

Following the Rauser touchdown, Whitehall would quickly score when Feight connected with Alexander for a 38-yard touchdown with 6:47 left in the opening quarter. Alexander had another outstanding performance for the Trojans with 10 catches for 154 yards and the touchdown. He was equally impressive on defense, adding nine tackles and the two interceptions.

Whitehall scored their third touchdown on the night two plays into the second quarter on a four-yard run from Feight. He was the team's leading ball carrier with nine rushes for 48 yards. 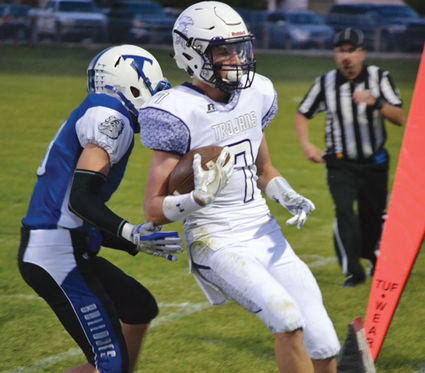 Senior Wyatt Alexander goes out of bounds after a first down Friday night in Whitehall's 26-14 victory.

Senior Braden Smith had four receptions for 50 yards and had eight tackles. Buus had two receptions for 45 yards, and Johnson had five catches for 33 yards.

Junior Sawyer Keener was the leading tackler for Whitehall with 12. Junior Colby Smith had a huge night for the Trojans with eight tackles and sack. Dawson Hoerauf and Buus each had five tackles. Hoerauf and Keener both had a sack.

Whitehall will next take to the field Friday night at home when they host rival Jefferson (5-1, 3-1 Southern B), in a homecoming rivalry matchup. The Panthers dropped their first game of the season Friday, 14-13 to Big Timber.

Lacey said Trojans will need to clean up some things prior to the game, but is looking forward Friday night.

"Control what we can control and play our style of football. We have to dictate all three phases of the game," he said. "I cannot wait for homecoming next week against Jefferson."