Community comes together at Powell Barn in Cardwell 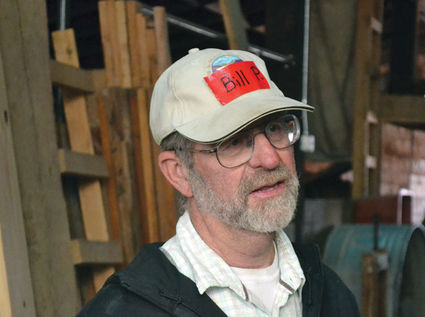 Standing last Saturday inside of the barn that has been part of his family for over 100 years, Cardwell resident Bill Powell was flooded with memories of the building.

"If these walls could talk, they could tell you a lot," Powell said.

On a detailed tour given by Powell, he shared not only what each area of the barn had been used for in the past, often times places that had multiple uses throughout the past century, but he was also able to take a sneak peak into the future.

On the overcast fall Montana morning, Powell shared the experiences of the past, while the barn was once again coming to life before his eyes as a incredible turnout of volunteers were busily working at a variety of tasks that ranged from putting in new windows to work on a new driveway.

The tremendous community effort was part of a Montana Preservation Alliance "Barn Raising" event at the property located at 118 Cemetery Hill Road in Cardwell. The MPA hosted the event as a collaboration with not only them and the Powell Family, but the many volunteers and local businesses who stepped up to help secure the barn as working component of the ranch, as well as to create a television pilot to showcase communities working together to celebrate and preserve their special history.

Among those in attendance Saturday was MPA Restoration Director Dustin Kalanick, who was more than pleased without the turnout at the event, saying it says so much about the community to come together for the project, hoping everyone involved can take a sense of accomplishment and pride from the day's work.

"It's a beautiful thing to see," Kalanick said.

Allison Whitmer, Film Commissioner for the Montana Film office, lauded the importance of events like Saturday, noting there are so many beautiful and historic buildings throughout the Treasure State.

Whitmer stressed the importance of not only restoring, but also appreciating places like the Powell's barn.

"Once you lose it, you don't get it back," she said. "We want people to appreciate the past and also look to the future. You can do both," she said.

In between visiting with volunteers and helping out with a wide-variety of jobs, Powell detailed what he knows about the history of the barn that dates back to roughly 1910.

He said his grandfather, John Powell, purchased the materials for the building through a "mail order barn," something that was common during the time. Powell said the lumber made its way to Cardwell on the Northwest Railway, either from Washington or Oregon. According to Bill, the purchase was made after his grandfather, who originally homesteaded the area in 1882, had a good wheat crop and decided to build.

Powell said there have been a variety of uses for the barn, and prior to the purchase of machinery, was used to house cows and horses. He also has memories of the barns being used for sheep, pigs, and had a long run as a dairy operation until a buyout in 1993.

The many local residents on hand Saturday also served as great reminder of how the barn was used as a social gathering place with many events including apple cider pressings.

Powell said his sons Tait and Josh would like to see the barn was again used in this role.

"They have a vision," he said.

Some of future uses of the barn mentioned by Powell are to play "old time movies," the return of apple cider pressings, and big parties.

The sense of community on Saturday is something that Powell cherished, and something he would like to see more of in the future. 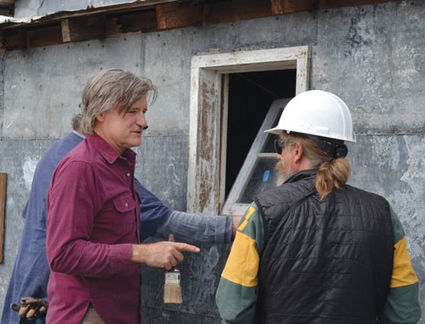 Bill Pullman helps out at the Powell's Barn.

He said it was huge to see people pull together for a common good, rather than tear each other apart for something personal.

Local ranch owner and actor Bill Pullman was instrumental in organizing the event, and also was pleased to see the turnout and people working together.

Pullman stressed the importance of not only everyone who turned out to volunteer, but the locals who pitched in to make the barn raising possible.