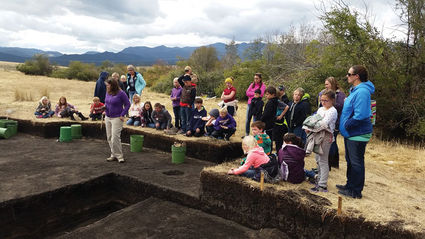 Whitehall Elementary fourth grade classes recently got to take part in a very interesting learning opportunity. We were contacted by Crystal Alegria of Project Archeology and the Montana Site Stewardship Program, about an opportunity to tour an archeological dig site being conducted by the Montana Department of Transportation. This was a great opportunity to involve the students in place based science and connect them to science in their own back yard. Ms. Alegria came to the school and gave our students a hands on lesson in archeology in the morning, and we got to take a bus up to the dig site in the afternoon.

The Montana Department of Transportation is completing improvements to the Whitetail Road from Boulder to Whitehall. As part of these improvements they conducted an environmental impact study, or EIS. In the process of completing the EIS they found artifacts. When artifacts are found it requires further study of the site. This summer archeologist from the Department of Transportation began an archeological dig in the area where the road will be widened and straightened out near the top of the pass along the creek. Unfortunately the archeologists conducting the dig had to be pulled to another site the day of our field trip but Ms. Alegira told us that this site has been used by many different groups of people throughout time. In the late 1800s it was the site of a homestead. The archeologist also found artifacts from native indigenous peoples. Ms. Alegria taught the students about the soil layers they could see on the perpendicular edges of the dig site. She explained that archeologist use the soil profile to gain approximate dating of the artifacts they find. One of the dig pits had a milky grey layer at the bottom about 3.5 ft down. She told the students this is an ash layer dating back 7,700 years ago to the enormous eruption of Mount Mazama. This volcanic eruption created the caldera that formed Crater Lake and covered the Northwest in a deep layer of ash.

Ms. Alegria also showed our students rocks with a red sheen, evidence that they had been heated in a camp fire. She explained to the kids that native people would build a fire pit and near it would dig another pit that they would line with an animal skin. They would fill the lined pit with water and then transfer heated rocks to the water and boil bones and meat scraps. They would then break the softened bones to get to the marrow in the middle of the bones. The marrow was a good source of fat and was used in the making of pemmican, a mixture of marrow and berries that was used like a protein bar when indigenous people were traveling or away from camp. Recent research has found that "bone marrow contains the hormone adiponectin, which helps maintain insulin sensitivity and break down fat and may have positive, protective roles, and influence adaptive functions outside of the bone tissue at least during calorie restriction" according to Ormond MacDougald, PhD, the John A. Faulkner Collegiate Professor of Molecular & Integrative Physiology, a professor of internal medicine, member of University of Michigan's Brehm Center for Diabetes Research, and a Fulbright Scholar at the University of Cambridge. We are only now learning what native people already knew. That is why it is so important to study and preserve our past.

We ended the day with a short drive to a meadow with a large blade of granite sticking straight up out of the ground. We took a short walk to rock and were able to see indigenous rock art that is estimated to date back to possibly over 1,000 years or more. Further evidence that this place we love has been loved by others for many years. Our beautiful Jefferson Valley, the one we are fortunate to call home.