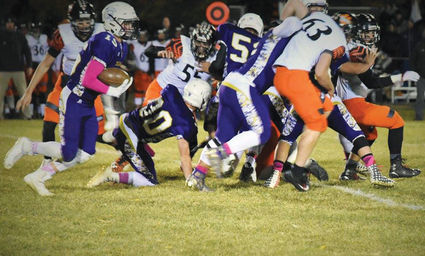 For the first time in 35 years, Whitehall will play host to a playoff football game. Playing on senior night at Trojans Field Friday night against Manhattan, the Whitehall/Harrison High School football team won a 19-14 thriller over the Tigers to finish the regular season undefeated (9-0) and win the Class B Southern Division Championship.

With the win, Whitehall earned the number one seed in the South and will host fourth seeded Shepherd Saturday, October 28 at 1 p.m.

One of six seniors on the 2017 squad, a jubilant Kayden Howser savored the hard fought victory.

"This feels so good. This is the first time the seniors have beaten them in a varsity game," Howser said.

Whitehall Head Coach Dan Lacey said his team was prepared for a slugfest between two great teams. He could not have been more correct.

After falling behind 12-0 at halftime, the Tigers came roaring back in the second half. Manhattan would cut the lead to 19-14 in the third quarter, and would drive deep into Trojans territory late in the game. The Tigers would get as close as the five yard with under two minutes remaining, when much like they have all year the Whitehall defense stepped up and sealed the victory.

Looking back on the final Tigers drive, Lacey said during the week you hope to prepare the kids to make the plays they did on defense at the end of the game. Lacey said they had worked on forcing Manhattan to pass when they were near the end zone.

"Their running game compliments their passing game. We wanted to get them in those passing situations near the goal line and prevent them from running. The windows are tight to make those completions and we were able to get the job done," he said.

After a defensive chess match at the start of the game, Whitehall was able to score the first touchdown of the game late in the first quarter on a nine yard run from junior quarterback Max Feight. After missing the extra point, the Trojans had a 6-0 lead with 1:39 left in the opening quarter.

The Trojans would extend their lead midway through the second when Feight connected with Lane Buus over the middle for a 25-yard touchdown to push the lead to 12-0 with 5:31 left in the first half.

The resilient Whitehall team would answer the score, but it would not be easy. Faced with a fourth and goal from the six-yard line, Feight connected with running back Sawyer Keener for a touchdown with 4:47 remaining in the third.

It was a huge night for Keener who had 77 yards rushing and 43-yards receiving.

"Sawyer stepped up with some big catches," Lacey said.

It would not take long for Manhattan to answer, and they cut the lead to 19-14 on a nine yard run from Tracer Stone with 3:35 left in the third quarter.

The Whitehall defense answered the call and held the Tigers without a point in the final 18 minutes of the game.

After stopping the final Manhattan drive, the Trojans sealed the victory with their run game and a first down run by Keener.

Lacey said Manhattan did a great job of containing Whitehall standout senior Wyatt Alexander at his receiver position, and praised the way his squad adjusted on offense and was able to run the ball with key carries from Keener, Connor Johnson, Feight and Braden Smith.

"We prepared really hard with our run game because we knew that was something we could use as a strength," Lacey said.

The Trojans coach was also pleased with the mental toughness of his team. Lacey said they had a couple big penalties in the red zone, but were able to overcome the adversity.

"Mistakes are going to happen. It's how we bounce back after that. We do have to make sure we are a little more disciplined, especially pre-snap," he said.

Whitehall will be facing a familiar foe October 28 when they host Shepherd (4-4, 4-2 Eastern B). In a road matchup in week one, the Trojans scored four first half touchdowns on their way to a 28-12 victory. 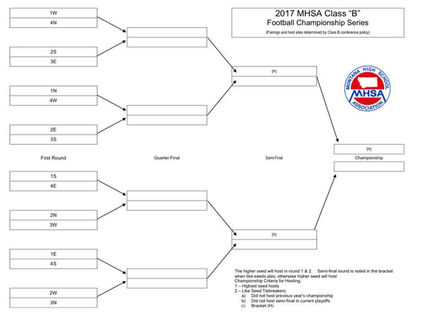 Feight had a huge first game against the Mustangs, with 260 yards passing, two touchdowns through the air, and also scored on a 10-yard run. Whitehall also scored on a 70-yard Johnson kickoff return.

Lacey said their will be two really good football teams playing Saturday and both teams will be a lot different from the opening game of the season.

"I'm super excited. We've got the best fans in the world and I can't wait for them watch us battle it out with Shepherd," he said.

Looking to next week, Howser said he knows they will be facing a good team, but his squad just needs to keep doing what they are doing.

"They (Shepherd) have gotten better, but we have too," Howser said.

Due to MHSA policy, activity passes and free senior admission will not be honored at the game. The cost is $7 for adults and $6 for students.